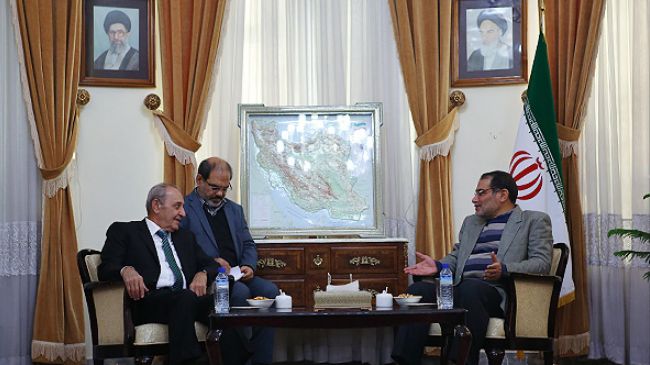 Secretary of Iran Supreme National Security Council (SNSC) Ali Shamkhani says Western threats and sanctions against Iran over its nuclear energy program have failed to affect the nation’s will to continue on in its path.

“Neither sanctions nor threats have had any impact on the Iranian nation’s will, and the West had no option but to opt for negotiations to solve the problems that it had created itself,” Shamkhani said in a meeting with Lebanese Parliament Speaker Nabih Berri in Tehran on Tuesday.

He added that the Israeli regime’s anger at the interim nuclear deal between Iran and the five permanent members of the UN Security Council plus Germany vindicated the Islamic Republic’s principle-based path.

After more than four days of intense negotiations, Iran and the six major world powers — the US, Britain, Russia, France, China and Germany — sealed an interim deal in Geneva, Switzerland, on November 24, to pave the way for the full resolution of the West’s decade-old dispute with Iran over its nuclear energy program.

Later on the day, Israeli Prime Minister Benjamin Netanyahu said the nuclear deal in Geneva “is not a historic agreement but rather a historic mistake” that is bad for Israel.

Shamkhani further said recent twin bombings outside the Iranian Embassy in the Lebanese capital of Beirut highlighted the importance of interaction among regional countries to fight terrorism and extremism.

“Regional states will not allow certain countries to target regional security by means of terrorism and…to cause religious and sectarian strife,” Shamkhani added.

He urged “free and independent” countries to strengthen unity and cooperation to play a leading role in international developments.

“Iran will proceed with its principled policies and approaches to supporting the [anti-Israeli] resistance, establishing peace and calm in the region, and expanding amicable relations with neighbors,” the senior Iranian security official added.

At least 25 people, including Iran Cultural Attaché to Beirut Hojjatoleslam Ebrahim Ansari and the wife of another Iranian diplomat, were killed and more than 150 others injured in two explosions that targeted the Iranian Embassy in Beirut’s southern neighborhood of Janah on November 19.

The Lebanese parliament speaker, for his part, said the recent nuclear deal between Iran and the six powers will be beneficial to regional and international peace and security.

Berri called on Iran to continue playing an active and effective role in resolving regional problems.

Heading a high-ranking delegation, the Lebanese parliament speaker arrived in Tehran on Sunday on an official four-day visit to hold talks with senior Iranian officials.