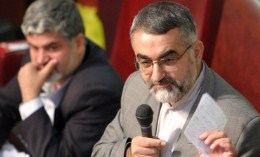 TEHRAN (FNA)- Chairman of the Iranian Parliament’s National Security and Foreign Policy Commission Alaeddin Boroujerdi lashed out at Israel for trying hard to make the Middle-East an insecure and unstable region.

Boroujerdi pointed to the recent terrorist attacks on Iranian embassy in Beirut, and said, “Takfiris and in fact the US and the Zionist regime want to make the entire Middle East insecure; what happened at the Iranian embassy in Lebanon is part of the Zionists’ efforts in line with this ominous objective.”

The two bomb blasts killed 23 people and injured 146 others near the Iranian embassy compound in the Lebanese capital. The attack targeted just 10 meters away from the embassy in Beirut’s Southern neighborhood of Jinah, inflicting much damage to the compound.

Boroujerdi lamented that the Takfiris have defamed Islam, and said that Qatar, Saudi Arabia and the US support the Takfiris who commit crimes in the world

“All the evidence and the manner of the act shows that the main perpetrators of the yesterday’s terrorist act in front of the Iranian embassy in Lebanon are Takfiri and extremist groups …,” Larijani said in an open parliament session on Wednesday.

He noted that after the incident a terrorist Takfiri group issued a statement and claimed responsibility for the crime.

“It goes without saying that the US and the Zionist regime benefit the most from this type of operations,” the Iranian parliament speaker said.

The Iranian Embassy’s cultural attaché Ebrahim Ansari, head of the embassy’s security team Rezwan Fares and five of his men were among the 23 people killed in the terrorist attack.