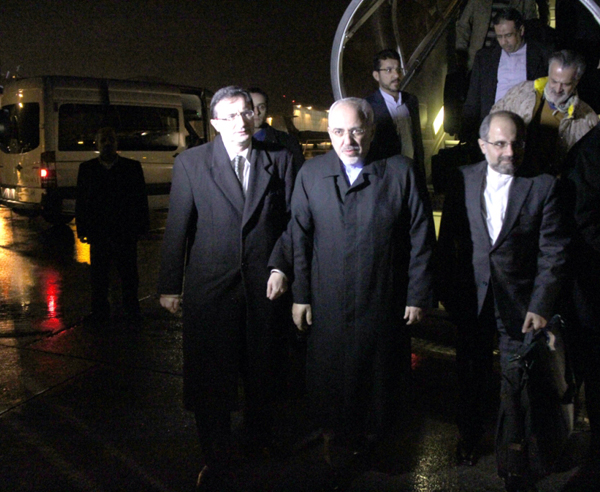 Iran and the 5+1 Powers (US, Britain, France, Germany, China, and Russia) signed an interim deal on Tehran’s nuclear program in Geneva early Sunday.

The agreement was reached after more than four days of detailed negotiations, two weeks after another meeting in Geneva had failed at the last minute to deliver an accord.

I hope we can start restoring the lost confidence.

The Iranian people demand respect for their rights and dignity, it is important to restore their confidence and I hope this process can do that.

President Obama welcomed the deal as an “important first step”, saying it includes “substantial limitations” on Iran and cuts off any move to a militarized nuclear program.

Tehran has agreed to suspend its enrichment of uranium to 20% — still civilian-grade but with the potential to be enriched further for a nuclear weapon — and to convert existing stock to fuel plates, putting it beyond any military use.

Iran has also agreed that any increase in the stock of 3.5% uranium over the next six months will be off-set by reductions elsewhere in its program. There will be a stricter inspections framework, developed with the International Atomic Energy Agency.

On one of the issues that blocked agreement two weeks ago, Iran has suspended construction of the Arak heavy-water reactor, due on-line in late 2014. Critics argue that the natural by-product of plutonium could be used in a military program.

In return for setting the limits, Iran will get $4.2 billion in sanctions relief over the next six months, according to a Western diplomat.

The number appears to refer to the release of frozen funds and not to the easing of any restrictions on trade in areas such as petrochemicals and automobiles.

US Secretary of State John Kerry said the deal does not recognize Iran’s right to enrich uranium.

In the last Geneva talks, France had objected to public recognition of the right to enrich. Iranian Foreign Minister Zarif indicated days later that, if an agreement permitted Iran’s program to continue, it might not be necessary to have explicit recognition in the agreement.

A official in Prime Minister Benjamin Netanyahu’s office said, “This is a bad deal. It grants Iran exactly what it wanted — both a significant easing in sanctions and preservation of the most significant parts of its nuclear program.”

Economics Minister Naftali Bennett delcared, “Israel does not see itself as bound by this bad, this very bad agreement that has been signed.”

And Finance Minister Yair Lapid complained, “You stand and shout out until you’re blue in the face, and you try to understand why they’re not listening. The world wanted an agreement.”

President Rouhani has addressed the Iranian nation on Sunday morning, hailing the interim nuclear agreement as an effective recognition of Iran’s right to enrich uranium.

Rouhani also emphasized the immediate easing of some sanctions and the prospect of a full removal within a year.

The President said that, with the conclusion of a comprehensive agreement next year, any belief of Iran’s pursuit of a nuclear weapons will be a “historical joke”.

Secret Talks Between US and Iranian Officials Since March

With the conclusion of the interim nuclear agreement in Geneva, the Associated Press has released details of secret high-level talks between Iran and the US since March.

Information about the discussions was withheld from US allies, including Israel, until September.

Three “senior Administration officials” said the last four meetings were held after President Rouhani was inaugurated in August. They said the sessions produced much of the interim agreement negotiated and agreed in the Geneva talks between Iran and the 5+1 Powers.

The officials would not give the names of the Iranian representatives, but said they were career diplomats, national security aides, and experts on the nuclear issue.

The officials said the March talks, building on the role of Oman’s Sultan Qaboos in negotiations such as the release of three American hikers from an Iranian prison in 2011, tried to break the deadlock in high-level talks that resumed in Kazakhstan in February.

They said the meeting also discussed Iranian involvement in Syria, Tehran’s threats to close the Strait of Hormuz, and the status of Robert Levinson, a missing former FBI agent who the U.S. believes was abducted in Iran, and two other Americans detained in the country.

Tbe US only began informing its allies after a phone call between Obama and Rouhani, who was in New York for the United Nations General Assembly, in late September. The US President briefed Israeli Prime Minister Benjamin Netanyahu during a September 30 meeting at the White House, telling him about the two meetings in the summer.

After telling Netanyahu about the secret talks, the United States then briefed the other members of the 5+1 Powers.