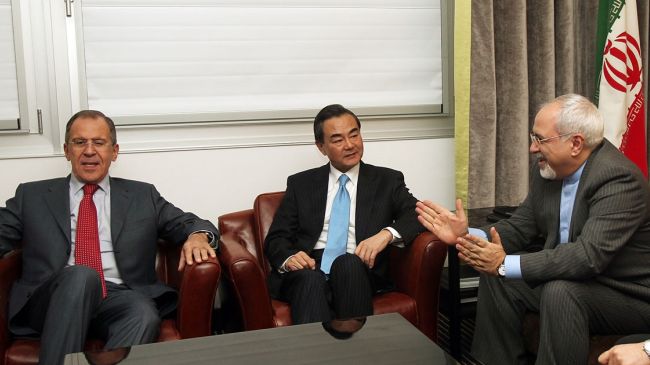 Iranian Foreign Minister Mohammad Javad Zarif enters into talks with his Chinese and Russian counterparts in the fourth day of talks over Tehran’s nuclear energy program in the Swiss city of Geneva.

The trilateral meeting between Zarif, Sergei Lavrov and Wang Yi comes after the top Iranian diplomat and EU foreign policy chief Catherine Ashton held talks for the seventh time in four days of the ongoing nuclear talks in the Swiss city.

A spokesman for Ashton earlier on Saturday described her talks with Zarif as intensive.

Ashton, which leads the teams from the six world powers — the US, France, Britain, Russia, China and Germany — is now briefing the foreign ministers of the respective countries on her meeting with the top Iranian diplomat.

Iran and the six countries began their latest round of negotiations on Wednesday. The present round of talks was scheduled to end on Friday, but was extended into Saturday.

The two sides are working to hammer out an interim deal to pave the way for the final resolution of the West’s decade-old dispute with Iran over its nuclear energy program.

During the previous talks held in early November, the two sides came very close to a deal, which failed to materialize, due to the position adopted by France in support of the Israeli regime.