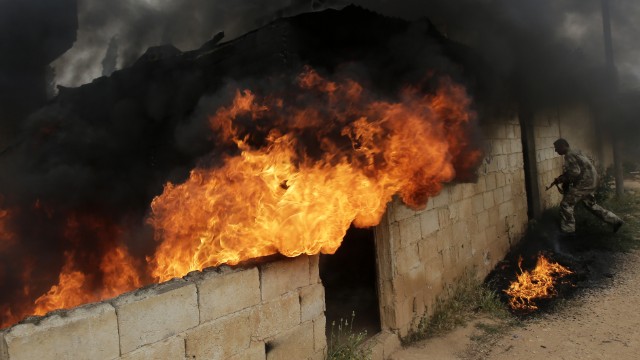 One person has been killed and several others have been injured in mortar attacks carried out by foreign-sponsored militants in Syria.

One of the attacks hit Lubaba al-Hilaliyeh School in the al-Qassaa neighborhood in the capital, Damascus, on Wednesday, official SANA news agency reported.

The Syrian news agency also reported that the attack damaged a number of shops and cars in the area.

In another incident on the same day, five mortar shells slammed into residential areas in Jaramana, Damascus countryside. At least five people were injured in the attack, SANA quoted a source at the Police Command in Damascus as saying. The attack caused material damage to some houses, cars and stores nearby.

On November 18, several mortar shells slammed into residential areas in al-Qassaa near al-Mawasem Square. Two people died in the attack.

Nearly three years of foreign-sponsored militancy in Syria has taken its toll on the lives of more than 100,000 people, according to statistics compiled by the United Nations. Millions have also been displaced due to the turmoil.

The UN has repeatedly warned against the humanitarian situation in the country, saying that over nine million people are in need of urgent aid due to the crisis. Over four million other Syrians will be forced out of their homes in 2014, the UN reported on October 7.