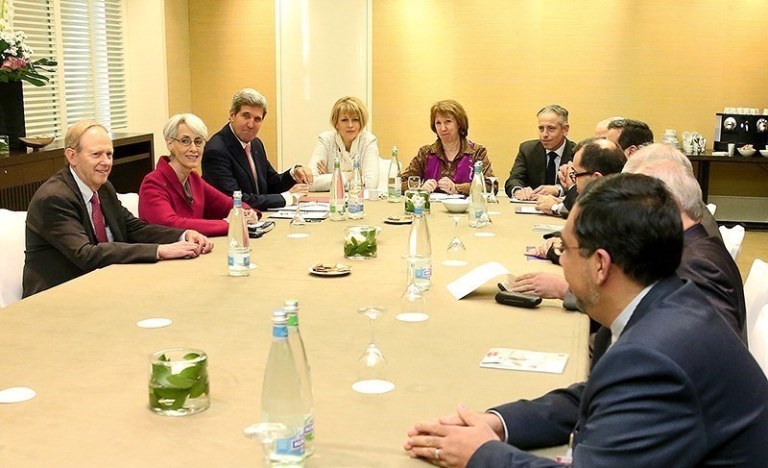 The three diplomat discussed the trend of talks between Iran and the Group 5+1 (the five permanent UNS Security Council members plus Germany).

Earlier, Araqchi and his German, British and French counterparts met on the sidelines of Iran-Six World Powers talks.

Earlier in the day, Araqchi met his Russian counterpart Sergei Ryabkov and his Chinese counterpart in Geneva.

Before the beginning of the new round of talks between Iran and the six world powers President Hassan Rouhani and Russian President Vladimir Putin talked on the phone.

Araqchi and his Chinese counterpart discussed the issues related to Iran’s nuclear standoff with the West.

The Group 5+1 comprises the US, Russia, Britain, France, China and Germany and the EU foreign policy chief Catherine Ashton presided over the meetings of the Group 5+1 with Iran.

The ongoing talks in Geneva are the third round of talks between Iran and the Group 5+1 in the past five weeks. The two sides have held two other rounds of talks on October 15-16 and November 7-9 previously.

Iranian Foreign Minister Mohammad Javad Zarif and Ashton met at 14:30 local time on Wednesday and before the new round of talks.

In the first round of round held in Geneva on October 15-16, the Group 5+1 member-states accepted the general items of Iran’s three-phased proposal titled ‘An End to an Unnecessary Crisis, A Beginning to New Horizons’ on the basis of Iran’s new foreign policy approach.

The two sides during the negotiations also agreed to determine their objective as well as the first and last steps and also to talk about the their concerns and confidence-building measures, including Iran’s peaceful nuclear program and oil, financial and banking sanctions.

In the second round of talks on November 7-9 also held in Geneva, the two sides discussed the details and the trend of talks moved in a direction that according to diplomats the two sides had achieved agreement up to the level of 90 percent.

The serious and progressive trend of talks made Ashton to invite US Secretary of State John Kerry to travel to Geneva and after this issue other foreign ministers of the six world powers, except China travelled to China.