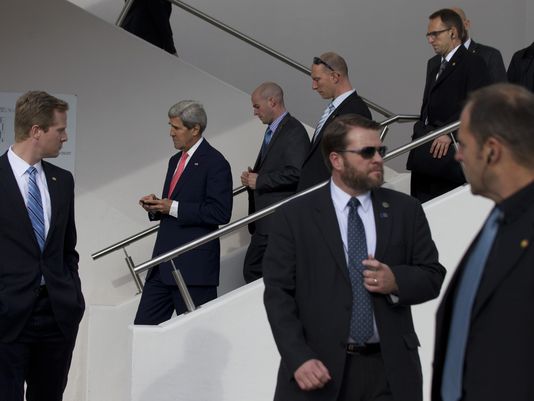 Tehran, Nov 20, IRNA — U.S. State Department spokesman Alan Eyre said Wednesday that Secretary of State John Kerry may attend nuclear talks with Iran, as he did in the last round of talks in Geneva if he feels his presence would help.

In an exclusive interview with IRNA, Eyre said the Iranian people voted for the new government to pursue interaction and cooperation with the international community so that the country could establish strong economic and social relations with the world once again.

The spokesman said that it is not enough to negotiate and the international community would decide about Iran based on the steps Tehran takes to address concerns of the world about its nuclear program.

Asked to comment about contacts between Iranian and US officials on the sidelines of the 68th session of UN General Assembly in New York, Eyre said, “It was a good start and the fact that the two sides spoke about reaching a joint goal was promising.”

“As President Obama said, settlement of (Iran’s) nuclear issue could be an important step towards improvement of Iran-US ties.”

He said that determination of both sides to keep secret the details of nuclear talks signifies that what is underway is serious.

On remarks by UK Foreign Secretary William Hague in the British parliament about the possibility of reaching an agreement with Iran and positive comments made by French, German and US officials in this regard, Eyre said, “As US Secretary of State John Kerry after the last round of nuclear talks with Iran said, we believe that an agreement is achievable.”

William Hague said on Monday he had no doubt that the West could reach a deal with Tehran.

French Foreign Minister Laurent Fabius has recently said that an agreement with Iran was not out of reach.

The German foreign minister and his US counterpart also talked about progress in the course of negotiations and narrowing of gaps between the two sides.