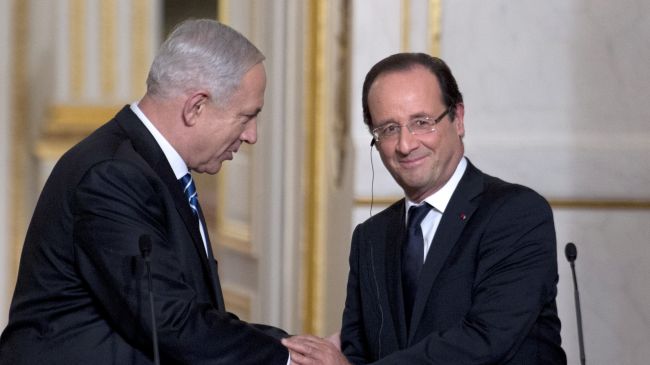 JERUSALEM — President François Hollande’s trip to Israel and the Palestinian territories, like all state visits, was planned months ago. But coming days before France and other world powers prepared to resume the nuclear talks with Iran in Geneva, the three-day visit that started on Sunday could not have come at a more opportune time for Israel — or for France, according to some Israeli officials.

The warm greetings exchanged by the French and Israeli leaders gave an international boost to Prime Minister Benjamin Netanyahu of Israel, who has been conducting a campaign against a deal he calls “dangerous” even before the final details have been negotiated.

At the same time, a senior Israeli official said, the country’s praise for Mr. Hollande’s tough stance at the nuclear talks “will provide a boost to France and even more motivation for it to stay the course.”

For years, France has been at the forefront of an effort by Western nations to stop what they say is an Iranian effort to acquire nuclear weapons, despite Iran’s repeated denials. In some respects, the French have been more suspicious of the Iranians than the Americans have been.

By being seen to have pulled the United States closer to the French position, the Israeli official said, speaking on the condition of anonymity for reasons of diplomacy, France has burnished its leadership role, at least in Israel’s view.

Yet Israeli officials and analysts acknowledged that the accolades for Mr. Hollande were based more on his tone and attitude than any illusions that France would become an advocate for Mr. Netanyahu’s maximalist demands in the talks with Iran.

“The best that the Israeli side can expect from France,” Shimon Shiffer, a political commentator, wrote in the popular Yediot Aharonot newspaper on Monday, “has to do with improving the terms of the agreement, no more.”

While Israelis were reassured to hear Mr. Hollande pledge that France would keep up the pressure on Iran and not remove sanctions until it was clear that Iran had given up what he called its quest for nuclear weapons, he has not backed Mr. Netanyahu’s demand for an end to all Iranian uranium enrichment, including to the low level of 3.5 percent.

At a news conference in Jerusalem on Sunday night, Mr. Hollande laid out four conditions for France to support an interim agreement: Placing all of Iran’s nuclear installations under immediate international supervision; suspending uranium enrichment to 20 percent; reducing Iran’s existing stockpile of enriched uranium; and halting the construction of a heavy-water reactor in Arak, a city in west central Iran.

Speaking at a special session of the Israeli Parliament on Monday, Mr. Netanyahu addressed Mr. Hollande as “My friend François.” Later, at a state dinner hosted by President Shimon Peres, Mr. Peres told Mr. Hollande, “Israel thanks you for the brave stance you have taken against Iran’s dangerous nuclear ambitions.”

The embrace of Mr. Hollande contrasts sharply with the tense exchanges over the last week between Israeli ministers and officials from the Obama administration. Mr. Netanyahu is scheduled to fly to Moscow for a meeting later this week with President Vladimir V. Putin.

There is little expectation in Israel that relations with France or others could serve as a real substitute for the Israeli-American alliance.

French-Israel relations have vacillated over the years. Alex Fishman, a military affairs analyst for Yediot Aharonot, described Mr. Hollande as “a pleasant fellow, but one who showed up with a bouquet of flowers several decades too late.” An article by Nadav Eyal in the newspaper Maariv said that it would be a mistake to rely on the French. “French diplomacy has one key tendency – uncompromising flexibility,” he wrote.

On Sunday, Mr. Netanyahu appeared to be trying to tone down his argument with Washington.

“John Kerry is an old friend and he is also a friend of Israel,” he said at the start of the weekly cabinet meeting, adding, “I would like to make it clear that there can be disagreements even among the best of friends, certainly on issues related to our future and our fate.”