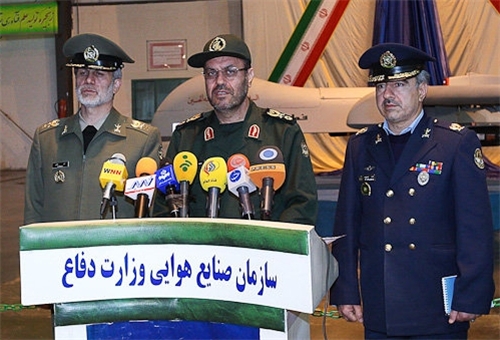 “This strategic drone has an operational range of 2,000 kilometers, and can fly to a ceiling of 25,000 feet in altitude for 16 to 30 hours, and these specifications enable it to conduct combat missions in addition to surveillance and reconnaissance missions,” Dehqan said addressing a ceremony held in Tehran today to unveil the new drone.

General Dehqan underlined that Iranian researchers are currently working on various models and designs of drones according to the country’s defensive needs.

Fotros was unveiled in a ceremony attended by General Dehqan in Tehran this morning.

In September 2012, Iran announced that it has started using Unmanned Aerial Vehicles (UAVs) for its air defense units as part of its broader plans for strengthening the country’s air defense capability.

Speaking to reporters on the occasion of the National Day of Air Defense here in Tehran on September 3, 2012, Commander of Khatam ol-Anbia Air Defense Base Brigadier General Farzad Esmayeeli said Iran has equipped its air defense units with Haazem drones. Haazem is a drone designed and manufactured by Iranian air defense experts in three short, mid and long range models and for air defense missions.