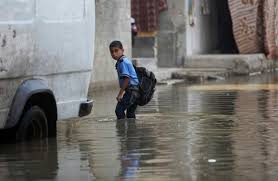 Sewage keeps flowing in the streets of the Gaza Strip causing a humanitarian disaster in the besieged enclave,Press TV reports.

On Friday, wastewater remained in the streets of Gaza due to fuel shortage, which has put a treatment facility out of work since Wednesday.

“We need an immediate solution to our calamity… The lives of our children are in great danger. Where is the international community in all of this?” said a Gazan resident.

Fuel and electricity shortages in the Israeli-blockaded Gaza have worsened in recent months due to Egypt’s closure of Gaza tunnels. These tunnels are the only lifeline for Palestinians living under the Israeli siege.

“This situation is nothing short of an environmental disaster and it must be dealt with immediately,” said another resident.

Gaza’s sole power plant supplies up to 65 megawatts, about a third of the enclave’s electricity needs.

However, with the severe fuel shortage, power cuts have recently been lasting up to 18 hours a day.

Gaza has been blockaded since June 2007, a situation that has caused a decline in the standards of living, unprecedented levels of unemployment, and unrelenting poverty.