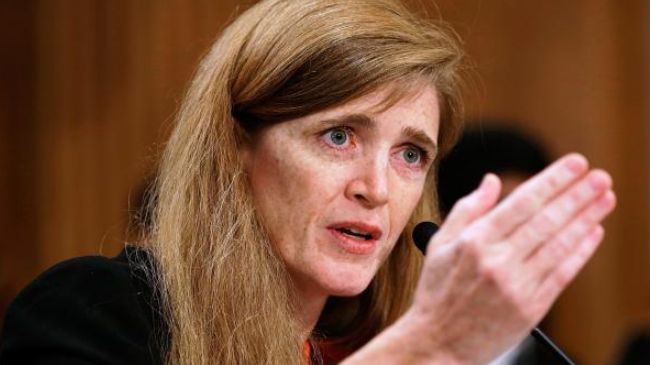 US Ambassador to the UN Samantha Power says the White House opposes news sanctions against Iran ahead of a possible nuclear agreement between Tehran and six world powers.

In response to the question of why the White House is against the tightening of the sanctions against Iran, Power noted that “we have to trust” Tehran, adding, “There is so much mistrust, of course, that we bring to these negotiations after generations of suspicion and that cuts both ways.”

The US diplomat said that a potential nuclear deal would entail a series of confidence-building measures by Iran in return for “temporary, modest, reversible, limited relief that we are promising.”

“To think that we could go from zero to sixty overnight and come to Congress with a comprehensive deal that any of us would trust, having not probed it in this way, I think is not realistic,” she pointed out.

On Thursday, US President Barack Obama urged Congress not to impose new sanctions against Iran and give time to diplomacy to help a deal with Iran over its nuclear energy program.

Obama said that there was the “possibility of an agreement” with Iran, but he reassured lawmakers that sanctions could be “ramped back up” if no deal is reached.

The US president’s remarks came as Israel, concerned over a possible Iran nuclear deal, is pushing the US Congress for new sanctions against Tehran.

Last week, Iran and the five permanent members of the UN Security Council – Britain, China, France, Russia and the US – plus Germany, held three days of intense discussions in the Swiss city of Geneva.

The two sides did not reach an agreement but stressed that significant progress had been made and expressed optimism about the prospect of a possible deal in the future.

The next round of the talks between Iran and the six countries is slated for November 20 in the Swiss city.