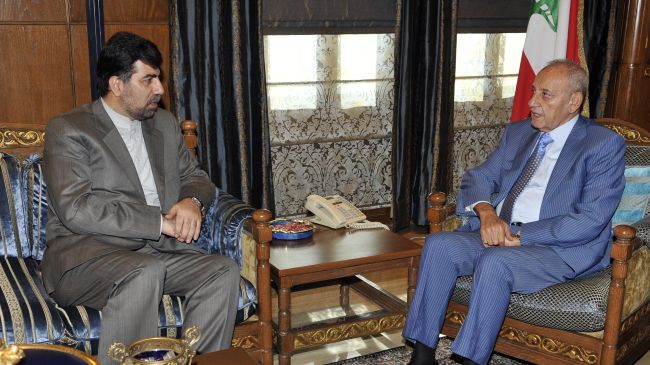 ‘Iran N-deal will be beneficial to entire Mideast’

An agreement between Iran and the five permanent members of the UN Security Council – the United States, China, Russia, France and Britain – plus Germany will be a milestone, its positive results will prevail across the region and Lebanon will also be a beneficiary, Berri said in a meeting with Iranian Ambassador to Beirut Ghazanfar Roknabadi on Wednesday.

He also pointed to Israel’s concerted efforts to sabotage negotiations over the Iranian nuclear case, stressing that the Tel Aviv regime will leave no stone unturned in pursuit of such a goal.

Berri went on to say that a deal over Tehran’s civilian nuclear work would mark a page in US history since it would be a measure unfazed by the Israeli pressure and in line with the interests of the American nation.

Roknabadi, for his part, briefed the Lebanese Parliament Speaker on the three-day negotiations between Iran and the six major world powers in the Swiss city of Geneva, and described the talks as positive.

Iran and the six powers could not reach a deal over Tehran’s nuclear energy program in the Geneva talks which started on November 7 and ended in the early hours of November 10, but the two sides said significant progress had been made and expressed optimism about the prospect of achieving a deal.

Tehran and the world powers will continue their nuclear negotiations in Geneva on November 20.