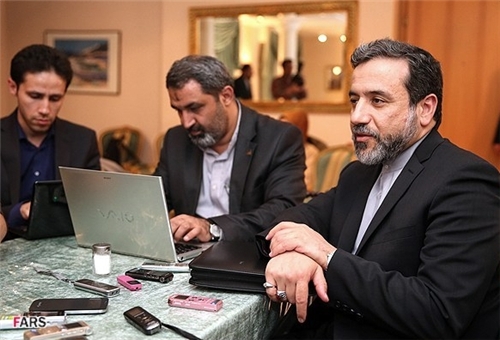 TEHRAN (FNA)- Iranian Deputy Foreign Minister and Senior Negotiator in talks with the world powers Seyed Abbas Araqchi stressed that the Group 5+1 (the US, Russia, China, France and Britain plus Germany) has accepted Tehran’s proposed framework to continue the talks, adding that both sides are resolved to endorse an agreement.

“The first session of the new round of negotiations between Iran and the G5+1 was held and we reviewed the last Geneva meeting (held on October 15 and 16) and the G5+1 announced that they have accepted Iran’s proposed framework,” Araqchi told Iranian reporters after the end of the first session of the talks between the two sides in Geneva on Thursday.

The first session of the Thursday talks between Iran and the world powers started in Geneva at 11:00 (local time) and ended after almost an hour.

Araqchi said all the diplomats attending the today talks believed that the two-day experts meeting held between the two sides in Vienna on October 30 and 31 to discuss the details of Iran’s new proposal for soothing the standoff with the West were “illustrative” and provided good information.

“They (the two sides) are due to start negotiations on the contents and talk about the details. The first step is highly important since we will enter a new atmosphere of cooperation. The last step is also important since it shows where we will reach,” he added.

Araqchi said that the representatives of Iran and the G5+1 will discuss the three steps proposed by Tehran in the afternoon, and added that the negotiators will hold bilateral meetings after 2:00 (Geneva time).

“(Iranian Foreign Minister Mohammad Javad) Zarif and (EU Foreign Policy Chief Catherine) Ashton will hold a meeting at 6:00 which will also be attended by a limited number of the two sides’ experts to conclude the results,” he said.

The senior Iranian negotiator expressed the hope that the two sides could agree on a single text for an agreement, and said, “Iran’s goal is endorsement of an agreement between the two sides and the other side also has the same view.”

In relevant remarks earlier today, Michael Mann, the spokesman for EU foreign policy chief Catherine Ashton, announced that Iran and the G5+1 are holding the most serious part of their talks to settle the standoff over Tehran’s nuclear program.

“The negotiations are highly complicated and have reached a serious stage but we cannot discuss the details since we want to focus on the contents,” Mann told reporters in a press conference after the start of the first round of talks between Iran and the world powers in Geneva on Thursday.

He described as good the meetings held between the two sides since yesterday, including a working breakfast held between Zarif and Ashton, to confer on the latest developments in the talks between Tehran and the G5+1, and said, “Other meetings are also due to be held this afternoon within different frameworks.”

Asked about the G5+1’s efforts to respond to Iran’s proposal for finding common goals, Mann said, “First, we should be assured that the nuclear goals of the Iranian side are peaceful and then we can come close to a common goal.”

Also, asked about certain sides, specially the Israeli officials’, opposition to the removal of the sanctions against Iran, he said, “We negotiate to reach a good and verifiable agreement to guarantee that the agreement is good for all.”