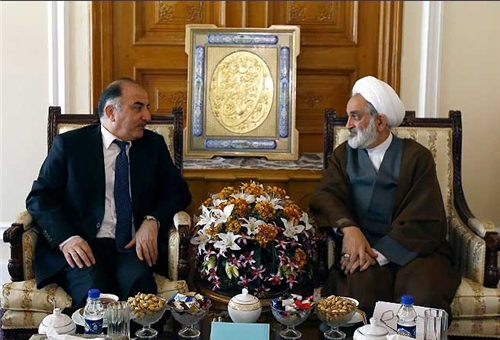 “These works are the shared cultural heritage of the two countries, and Iran and Azerbaijan should join hands to protect such works,” Salek said in a meeting with Azeri Ambassador to Iran Javanshir Akhundov in Tehran on Tuesday.

He reminded that Iran and Azerbaijan are two friendly and neighborly countries that are ready to consolidate their friendship and remove the differences.

Salek said the two countries should resolve the existing misunderstandings which, he said, are the product of the distortion of history through diologue and talks.

Akhundov, for his part, pointed to his country’s interest in the deepening of the relations with Iran, and said, “The joint cultural heritages of the two countries have always been respected by the people and officials of the Republic of Azerbaijan, and Baku will do its best to preserve them.

In an astonishing move, Azeri officials announced earlier this year that the Persian-inscribed tiles in the mausoleum of Nezami Ganjavi would be replaced with the Azeri translation of his poems.

Director of Nezami Ganjavi Center of Azerbaijan National Academy of Sciences (ANAS) Khalil Yusifli said in August the poet’s chosen poems inscribed on tiles were translated into Azeri from Persian.

Also in August, the Azeri government destroyed all tiles with Persian inscription on them at the mausoleum in Ganja using restoration work as a pretext for the measure.

The Azeri government has been waging an extensive campaign to falsify the identity of the renowned 12th-century Persian poet, whose formal name was Jamal ad-Din Abu Muhammad Ilyas ibn-Yusuf ibn-Zakki.

Meanwhile, Baku has introduced Nezami as an Azeri poet in all the country’s text books. This is while Nezami (1141-1209 AD) has not written any poems in Azeri.