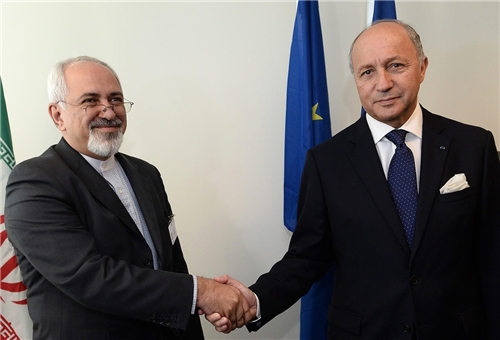 TEHRAN (FNA)- Iranian Foreign Minister Mohammad Javad Zarif is due to hold a meeting with his French counterpart Laurent Fabius in Paris to confer on the latest developments in Syria.

“Our foreign minister is scheduled to meet and hold talks with Laurent Fabius on the sidelines of his visit to Paris (where he is due to take part in the 37th session of the General Conference of the United Nations Educational, Scientific and Cultural Organization),” Foreign Ministry Spokeswoman Marziyeh Afkham told reporters in her weekly press conference in Tehran on Tuesday.

Noting that the two top diplomats will discuss regional and international issues as well as the relations between Tehran and Paris in their talks, Afkham said, “Iran’s nuclear issue and the Syrian issue will be the main topics of these consultations.”

The French foreign minister had earlier underlined the need for holding talks between Iran and France on different issues, including Syria and Tehran’s nuclear program.

“Iran is a great and important country and our assessment from the recent presidential election (in Iran) is that a great change has taken place in the country based on the Iranian nation’s will, and this decision has been taken by the nation,” the French foreign minister said in a meeting with Iranian Ambassador to Paris Ali Ahani in August.

Fabius pointed to abundance of potentials for Iran-France mutual cooperation, and said his country welcomes direct talks with Iran on different issues, including the Syrian crisis.