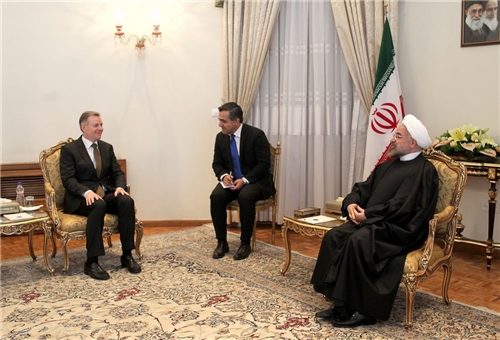 TEHRAN (FNA)- Iran’s President Hassan Rouhani said some good progress has been made in the course of the recent nuclear talks with the world powers, and asked Austria to help normalize Iran’s nuclear dossier at the International Atomic Energy Agency (IAEA).

“Some good progresses have been made in the talks between the Islamic Republic of Iran and the Group 5+1 (the five permanent UN Security Council members plus Germany) negotiators in the nuclear issue,” Rouhani said during a meeting with Austrian Ambassador to Iran Friedrich Stift on Tuesday.

The Iranian president further expressed the hope that “new and more effective steps” would be witnessed in the progressive trend of the nuclear talks in the upcoming meeting between Iran and the sextet in Geneva this week.

President Rouhani also urged Austria to help resolve the nuclear standoff between Iran and the West, saying, “We expect Austria, as a member of the IAEA’s Board of Governors, to be more active in order for Iran’s nuclear dossier to be normalized as soon as possible.”

In relevant remarks, Iranian Foreign Minister Mohammad Javad Zarif on Monday stressed that Iran is moving on the right path over its nuclear talks with the world powers.

“What is seen in the international community indicates that Iran’s ill-wishers have become isolated and that the Islamic Republic has succeeded in playing its role more seriously and without compromise at an international level,” Zarif said.

The last meeting of the seven countries was in Geneva and lasted for two days on October 15 and 16.

Both Tehran and the delegations of the G5+1(the five permanent UN Security Council member plus Germany) voiced satisfaction in the outcomes of the Geneva meeting and decided to send their experts to two days of talks in Vienna on October 30 and 31 to discuss details of Iran’s new proposal for soothing the crisis.