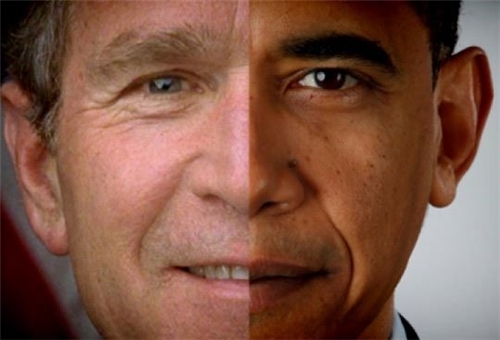 Until a few years ago, “everybody” included Edward Snowden. The 29-year-old former CIA technical assistant, responsible for one of the biggest intelligence leaks in US history, first considered “exposing government secrets” back in 2008, according to the Guardian, and then chose not to because “the election of Barack Obama… gave him hope that there would be real reforms, rendering disclosures unnecessary”.

But then the intelligence analyst, like the rest of us, “watched as Obama advanced the very policies that I thought would be reined in” and as a result he “got hardened”.

After the NSA surveillance scandal, which comes hot on the heels of allegations that the Obama administration spied extensively on the Fox News reporter James Rosen and secretly wiretapped the offices of the Associated Press, it isn’t just Snowden who has been “hardened”.

In the US, the Huffington Post splashed on an image of Obama morphing into George W. Bush, an image first used on the cover of the New Statesman in 2009. The president “finds himself in Bush territory”, said the Obama-supporting Washington Post. Here in the UK, the Guardian’s Americanophile-in-chief, Jonathan Freedland, labelled the president “George W. Obama”.

How times change. “In the field of counterterrorism and on the issue of executive power as a whole, Obama has distressingly begun to resemble George W. Bush,” I wrote in the New Statesman in October 2009 under the headline “Barack W. Bush”. Ten months in to the president’s first term, Obamania was still in full flow and my piece was received in liberal circles with a mix of ridicule, scorn and outrage.

Claiming that Obama was “nothing like his predecessor”, Ken Gude, vice-president of the pro-Obama Centre for American Progress, mocked me for having “unrealistic expectations” of the US president. That has been the standard defence from Obama apologists in the past five years. It’s not Barack’s fault that his “fucking retarded” critics on the left (to quote the former Obama chief of staff Rahm Emanuel), who “ought to be drugtested” (to quote the president’s former press spokesman Robert Gibbs), hold him to unfairly high standards.

I guess we shouldn’t have taken it seriously when Senator Obama claimed in 2005 that President Bush’s Patriot Act “seriously jeopardises the rights of all Americans and the ideals America stands for”. We shouldn’t have listened when he pledged to end the “illegal wiretapping of American citizens” in August 2007. We should have put our hands over our ears in November that year when we heard Candidate Obama, on the campaign trail, outlining his plan to “lead by example” on human rights and civil liberties. “That’s easy,” he said. “Close down Guantanamo. Restore habeas corpus. Say no to renditions. Say no to wireless wiretaps.”

Nor should we have expected a professor of constitutional law to respect a constitutional right to privacy (or, for that matter, a winner of the Nobel Peace Prize to opt for diplomacy over drones).

These were unrealistic expectations. We should have assumed the worst. We should have predicted that Obama would not just continue where Bush left off but – astonishingly and shamelessly – go far beyond Dubya in several respects.

Consider the row over mass surveillance. “Any analyst at any time can target anyone,” Snowden told the Guardian on 9 June. “I, sitting at my desk, had the authority to wiretap anyone, from you or your accountant to a federal judge to even the president if I had a personal email.” On Fox News on the same day, Bush’s former NSA director Michael Hayden confirmed that the agency’s surveillance programme had indeed “expanded” under Obama, adding that “there is incredible continuity between the two presidents”.

Second, Obama authorised six times as many drone strikes in his first term in office as Bush did over two terms. Dubya had terror suspects detained and even tortured; Barack just has them bumped off.

Third, Obama has sanctioned the extrajudicial killing – again, by drone strike – of four US citizens since 2009. Where is the liberal outcry? The Bush administration killed the Buffalo-born Kamal Derwish in 2002 – but claimed he was collateral damage and, to be fair, never claimed the legal right to assassinate Americans in the way that the Obama administration has done, with its Orwellian “kill lists” and “secret panels”.

Fourth, on war powers. Senator Obama told the Boston Globe in December 2007 that “the president does not have power under the constitution to unilaterally authorise a military attack in a situation that does not involve stopping an actual or imminent threat to the nation”. Yet President Obama took the United States into war with Libya in 2011 even though Colonel Gaddafi posed zero threat to the security of the US. Despite his imperial pretensions, Bush allowed Congress to vote on the invasions of both Iraq and Afghanistan; on Libya, Obama didn’t bother to ask.

The US president is cool, calm and media-savvy. But presidents must be judged by their policies, not their personalities. And, seen from a liberal perspective, US national security policies aren’t pretty. Don’t take my word for it. Just think about the verdict of the former Bush press spokesman Ari Fleischer, who gleefully wrote on Twitter after Snowden’s NSA revelations: “Drone strikes. Wiretaps. Gitmo. [Obama] is carrying out Bush’s 4th term.”