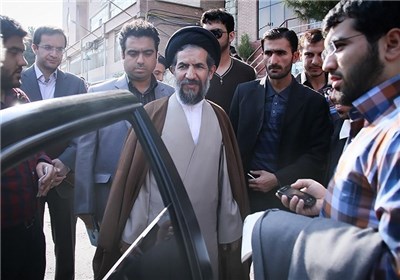 TEHRAN (Tasnim) – Iranian Parliament’s vice speaker on Monday voiced the parliament’s support for the country’s team of nuclear negotiators in their interactions with six world powers aimed at finding a solution for Iran’s nuclear dispute that has lingered on for over a decade.

“Parliament pulls its weight behind the country’s nuclear negotiatorsand the nation should cooperate in this regard so that the country becomes independent economically,” Mohammad Hassan Aboutorabifard told people attending a rally to mark the anniversary of US embassy seizure in Iran’s holy city of Qom.

The Supreme Leader of Islamic Revolution Ayatollah Khamenei commenting on the nuclear talks on Iran’s peaceful nuclear program, said on Sunday, “I am not optimistic about the ongoing negotiations, because it is not clear whether they would bring about the results expected by the nation.”

“My advice to the officials in the arena of diplomacy and negotiations is to be vigilant so that the deceptive smile of the enemy does not lead you to make a mistake and error,” added Ayatollah Khamenei.

The Leader further lent his support to the team of Iranian negotiators in nuclear talks, and stressed, “Nobody should weaken or insult them, or regard them as compromising.”

Elsewhere in his address Aboutorabifard said that today Iran has emerged as a superior military power that has been able to cut the US and other  countries in the Middle East region down to size.

The vice speaker said that the Iranian nation’s message to the world nations has been not to ignore their national might in confrontation with the “paper monster of the US” because any nation can achieve dignity and respect through relying on its own potentials.

On November 4, 1979, and in less than a year after the victory of the Islamic Revolution that toppled a US-backed monarchy, a group of Iranian university students who had been incensed by US espionage activities in the country seized the US embassy in Tehran.

The students who seized the embassy later published documents proving that the compound was indeed engaged in plans and measures to topple the Islamic system.