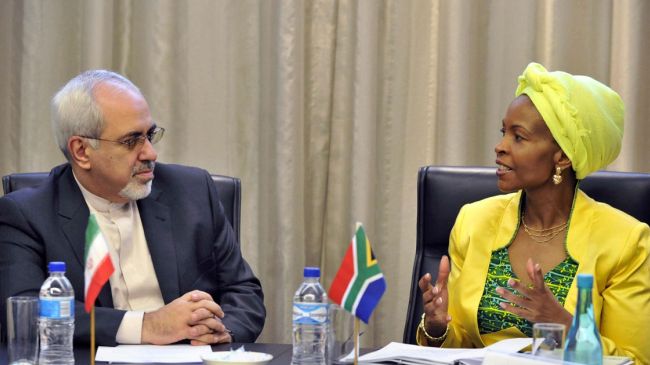 Zarif hopes for removal of sanctions

Iran Foreign Minister Mohammad Javad Zarif has expressed hope that the six powers engaged in nuclear talks with Iran would undertake measures aimed at lifting the illegal sanctions against the country.

“Considering the confidence-building measures taken by the Islamic Republic of Iran in the course of the negotiations with the P5+1 (the US, Britain, France, Russia, and China plus Germany), I hope that the necessary mechanism would be put in place for the removal of illegal sanctions against the Islamic Republic of Iran,” Zarif said at his Thursday meeting with South Africa’s Minister of International Relations and Cooperation Maite Emily Nkoana-Mashabane in South Africa’s capital city of Pretoria.

Iran and the six world powers held two days of negotiations over Tehran’s nuclear energy program in Geneva, Switzerland, on October 15-16. The two sides agreed to have expert-level talks before meeting again in the Swiss city on November 7-8.

Zarif pointed to Tehran-Pretoria cooperation in the Non-Aligned Movement, particularly with regard to the international disarmament, and expressed gratitude over South Africa’s positions against the unilateral embargos against Iran.

Zarif, who is slated to take part in the 11th meeting of the Iran-South Africa Joint Cooperation Commission as the head of the Iranian delegation, praised the extensive participation of Iranian private sector managers at the event, and underlined the importance of expanding economic and commercial cooperation between the two countries’ private sectors.

The event, which began on October 30 after a four-year hiatus, will be co-chaired by Zarif and Nkoana-Mashabane.

Nkoana-Mashabane, for her part, lauded the recent breakthrough in the course of Iran’s nuclear talks with the six world powers.

She also underscored the need for promotion of bilateral cooperation between Iran and South Africa as key to fulfilling the interests of both nations.

Nkoana-Mashabane pointed to South Africa’s role in the African Union and the country’s future infrastructural development plans, and called on Iran to share its relevant expertise with South Africa.

Zarif’s trip to South Africa is his first official visit to Africa as foreign minister.