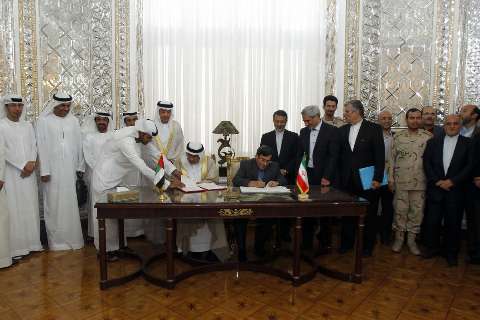 Senior officials from Iran and the United Arab Emirates (UAE) have exchanged views on ways to expand bilateral relations and issues of mutual interest between Tehran and Abu Dhabi.

“There are many opportunities and potentials for relations which should be used… the most important responsibility for both sides is to move toward the development of relations between the two countries…,” Sarmadi said.

Al-Heidan traveled to Iran to participate in the 8th meeting of the Iran-UAE Joint Consular Commission.

Al-Heidan for his part, expressed his country’s determination to improve bilateral ties with Iran, describing Tehran-Abu Dhabi relation as “brotherly” and “historic”.

He also hailed the Joint Consular Commission as one of the great achievements of close relation between the two countries.

On Wednesday, The Islamic Republic of Iran and the UAE signed a Memorandum of Understanding (MoU) on mutual cooperation.

The 16-article MoU, which includes judicial cooperation on criminal matters such as the swap of prisoners, was signed in a meeting between al-Heidan and Iran Deputy Foreign Minister for Consular, Parliamentary and Iranian Expatriates Affairs Hassan Qashqavi.