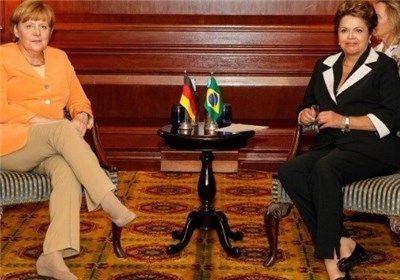 TEHRAN (Tasnim) – Germany and Brazil are working on a UN General Assembly resolution to highlight international anger at US data spying in other countries, diplomats said.

The resolution would not mention the United States, but would call for extending UN’s multilateral treaty, the International Covenant on Civil and Political Rights, to internet activities.

“German and Brazilian diplomats met counterparts from Europe and Latin America today to discuss a draft resolution,” a UN diplomat involved in the talks said on condition of anonymity on Friday.

“The aim is to send a message to those who abuse the system,” added the diplomat.

Amongst the core group of countries at the meeting were envoys from France, Sweden, Norway and Austria.

Germany has been angered by eavesdropping on Chancellor Angela Merkel’s mobile phone by US intelligence.

Brazil’s President Dilma Rousseff cancelled a trip to the US last month over allegations the National Security Agency intercepted her office’s communications.

Rousseff had already announced that Brazil would seek a UN measure on privacy.

The two countries expect to register a draft resolution at a UN General Assembly committee that handles human rights next Friday and a vote should be held before the end of November.

The International Covenant on Civil and Political Rights went into force in 1976, before the internet started, Al Jazeera reported.

But Brazil and Germany want a provision of the covenant that says “no one shall be subjected to arbitrary or unlawful interference with his privacy, family, home or correspondence, nor to unlawful attacks on his honor and reputation” extended to cyberspace.