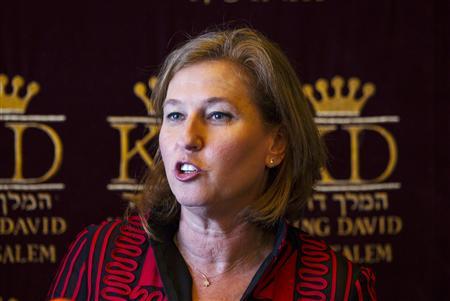 (Reuters) – Saudi Arabia and Israel are united in their opposition to Iran, but they cannot cooperate as long the Palestinian conflict continues, Israel’s chief peace negotiator said on Thursday.

“When you hear the Saudis talking about what needs to be done in order to prevent a (nuclear-armed) Iran, I mean it sounds familiar,” said Tzipi Livni, a former Israeli foreign minister who is leading talks with the Palestinians.

“I think that you can hear that Arabic sounds familiar to Hebrew when it comes to Iran,” she said, making a rare public linkage between the goals of Israel and Saudi Arabia, which have long been enemies and have no diplomatic ties.

Both Israel and Saudi Arabia, a Sunni Muslim regional rival of Shi’ite Iran, fear that Tehran is developing atomic weapons and looking to change the balance of power in the Middle East. Iran says its nuclear activities are entirely peaceful.

Three years ago, diplomatic cables published by WikiLeaks said that Saudi King Abdullah had frequently urged the United States to attack Iran to put an end to its nuclear program. Israel has also hinted at military action, saying it was prepared to stand alone to prevent a nuclear-armed Iran.

Livni, however, suggested that was unrealistic, telling a conference organized by the Jerusalem Post that Arab states first wanted to see progress in Israeli-Palestinian peacemaking before contemplating any change of policy toward Israel.

“In order to prevent Iran from having a nuclear weapon, we need to cooperate with those (who) understand that Iran is a threat to them as well,” she said, speaking in English.

“But unfortunately, the open conflict with the Palestinians makes it impossible or very difficult for them to act with Israel.”

Last week, Saudi Arabia cited international failure to grant Palestinians a state as one of the reasons it had renounced a coveted seat on the United Nations Security Council.

“It is now very clear that the interests of the State of Israel (and) the moderates or the pragmatic in the region are the same,” Livni said. “So we need on one hand to continue putting pressure on Iran … and simultaneously to move forward in the peace process.”

Both issues were on the agenda of a lengthy meeting between Netanyahu and U.S. Secretary of State John Kerry on Wednesday in Rome that exposed differences over the Iranian issue.

Israel has repeatedly called for the effective dismantling of Iran’s nuclear program, while the United States has suggested better safeguards are needed to ensure it is peaceful.

The Israeli-Palestinian peace talks, revived in July after a three-year hiatus, have shown few signs of progress.

“I cannot share with you today what we are doing exactly in the negotiations room, but the basic idea is the need to end the conflict,” Livni said.

“In order to do so, we need to address all the core issues,” she added, in a reference to the borders of a Palestinian state, security arrangements, the future of settlements and Jerusalem and the fate of Palestinian refugees.

Livni said both sides had decided “that nothing is agreed until everything is agreed”, effectively ruling out any interim accord that many Israeli leaders are believed to favor.

In the West Bank city of Ramallah, a senior Palestinian official described the talks as very difficult.

“There is a long road ahead but we are following the instructions from President (Mahmoud) Abbas and are very keen to reach peace,” the official said.