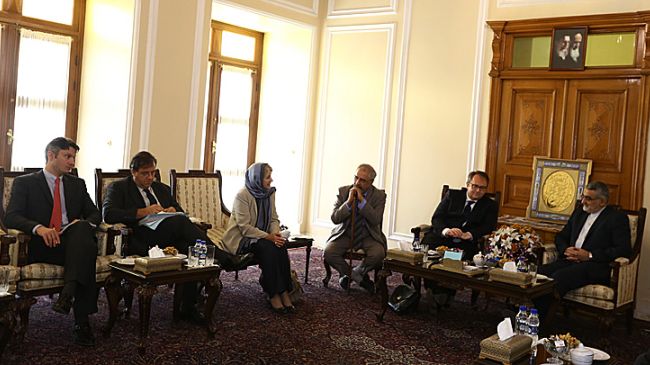 A senior Iranian lawmaker says the Islamic Republic will continue its nuclear energy program within the framework of the Non-Proliferation Treaty (NPT) and under the International Atomic Energy Agency (IAEA) inspection.

“Iran believes that the existence of even one nuclear bomb poses a serious threat to the global security and peace,” Chairman of the Majlis National Security and Foreign Policy Committee Alaeddin Boroujerdi said in a meeting with French senators Joelle Garriaud-Maylam and Jean-Yves Leconte in Tehran on Wednesday.

“The recognition of the Islamic Republic of Iran’s right to acquire peaceful nuclear energy forms the basis for any agreement with the P5+1,” the Iranian lawmaker stated.

Boroujerdi stated that Iran hails the Syrian government’s cooperation with the Organization for the Prohibition of Chemical Weapons (OPCW) and United Nations on the elimination of its chemical weapons as a courageous move, and maintains that the Israeli regime must also destroy its undeclared nuclear arsenal.

The Israeli regime is widely believed to be the sole possessor of nuclear weapons in the Middle East. The regime reportedly maintains between 200 and 400 atomic warheads, but under its policy of so-called nuclear ambiguity, it has never denied nor confirmed its possession of the weapons of mass destruction.

Furthermore, Tel Aviv has never allowed any inspection of its nuclear facilities and continues to defy international calls to join the NPT.

Boroujerdi also stressed Iran’s principled policy in the establishment of peace and stability in the Middle East, noting that security and peace in the Persian Gulf can only be ensured through cooperation and collective efforts of all regional states.

Garriaud-Maylam, for her part, expressed the French Senate’s readiness to expand parliamentary ties with Iran’s Majlis.

She said that French and Iranian parliaments can facilitate further enhancement of all-out relations between Paris and Tehran.

Leconte also hailed Iran’s significant and influential role in the Middle East, noting that the Islamic Republic greatly contributes to the regional security as a mighty and stable country.