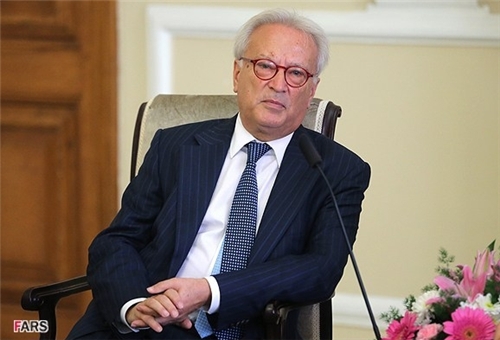 Senior member of the European Parliament (EP) Hannes Swoboda says the Syria conflict cannot be settled without Iran’s engagement, stressing that the ongoing crisis in the Arab nation must be resolved through political means and not a military intervention.

“We believe that military intervention cannot solve the Syrian issue. For that reason, the solution to this problem must be found through a political mechanism,” Swoboda said at a press conference in Tehran on Monday evening.

He further noted that a political solution to the Syrian crisis is virtually impossible without Iran’s participation.

The senior European Parliament official added that Iran and the European Union share common interests, namely the campaign against terrorism and the establishment of peace and stability in the Middle East.

“The Secretary-General and Mr. Brahimi had made clear their views on the attendance by other relevant countries at the conference,” Nesirky said in a press conference in response to a question about Iran’s participation in the peace talks on Syria.

On September 29, Brahimi stated that it would be beneficial if Iran takes part in the Geneva 2 conference and there is the possibility of inviting the Islamic Republic.

In a meeting with Iranian Foreign Minister Mohammad Javad Zarif in New York on October 2, Ban also underscored Tehran’s decisive role in the settlement of the crisis in Syria, stressing the need for Iran’s presence in any international talks on Syria.

Iran has said that it would attend the Geneva 2 conference if invited without any preconditions.

Russia and China have also urged the presence of the Islamic Republic of Iran in the Geneva 2 conference.