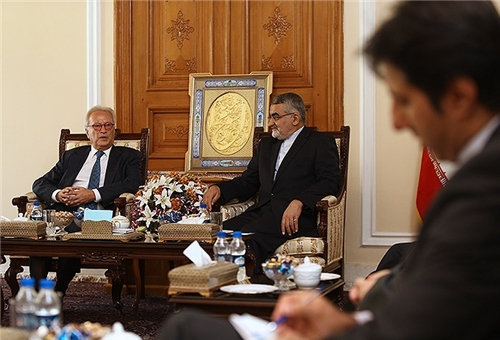 TEHRAN (FNA)- Chairman of the Iranian Parliament’s National Security and Foreign Policy Commission Alaeddin Boroujerdi underlined that Iran as a signatory to the Non-Proliferation Treaty (NPT) is after utilizing nuclear technology for peaceful purposes.

Speaking at a meeting with the European Parliament (EP)’s Delegation, headed by Hannes Swoboda, the senior Iranian parliamentarian Sunday once more stressed the peaceful nature of Iran’s nuclear energy program.

The EP delegation, comprised of three Socialist European lawmakers, arrived in Tehran on Saturday for a four-day visit.

Iran has so far ruled out halting or limiting its nuclear work in exchange for trade and other incentives, saying that renouncing its rights under the NPT would encourage the world powers to put further pressure on the country and would not lead to a change in the West’s hardline stance on Tehran.

Iran has also insisted that it would continue enriching uranium because it needs to provide fuel to a 300-megawatt light-water reactor it is building in the Southwestern town of Darkhoveyn as well as its first nuclear power plant in the Southern port city of Bushehr.