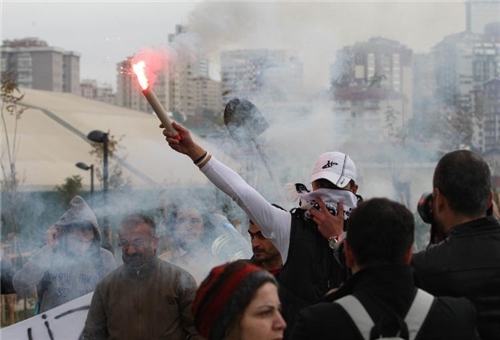 TEHRAN (FNA)- Turkish police fired tear gas canisters on students gathered to protest the beginning of controversial works on a road through their university campus in Ankara.

Security forces shielded workers and diggers as they began uprooting trees in a park on the site of Middle East Technical University (METU) in the Turkish capital on Friday night, AFP reported.

Dozens of students massed behind the gates of the establishment, Turkey’s Dogan press agency reported, angry with the planned destruction of 3,000 trees.

The ongoing battle against the Ankara development has raged for weeks, with police using rubber bullets and tear gas in protests that drew in hundreds of students in early September.

METU’s campus is one of the largest green spaces in the Turkish capital.

Amnesty International said in a report released on 2 October that “a string of human rights violations on a huge scale” were perpetrated by police.

What started as a relatively small environmentalist movement to save Istanbul’s central Gezi Park from re-development evolved into a nationwide wave of protests against Prime Minister Recep Tayyip Erdogan, who is seen as increasingly authoritarian.

At least six people were killed and more than 8,000 people injured following the three weeks of demonstrations across the country in June, presenting Erdogan’s Justice and Development Party (AKP) with its biggest challenge since it came to power in 2002.