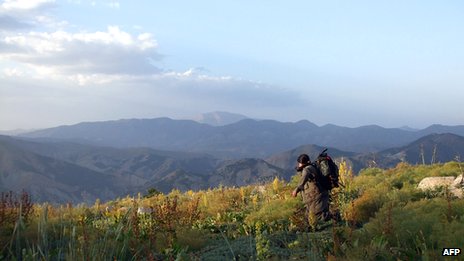 The imprisoned leader of the Kurdistan Workers’ Party (PKK) Abdullah Ocalan has urged the Turkish government to engage in serious talks in a bid to end nearly three decades of conflict.

In a written statement released by the pro-Kurdish Peace and Democracy Party (BDP) on Monday, Ocalan said he was still hopeful a peace deal with the Turkish government was possible but argued that Ankara needed to shift the process into a new gear, AFFP reported.

“I am waiting for the state to respond with meaningful, deep negotiations,” Ocalan said in the statement.

“It is necessary to put into practice deep negotiations without delay because of the sensitivity of the process,” he added.

Ocalan, who is serving a life term in a prison on an island south of Istanbul, began talks with state officials a year ago with the aim of halting the conflict which has left tens of thousands of people dead.

“Just as no legal foundation has been established during the year, there has been no rejection and no progress,” he said.

“While I retain my hope for the process, I am repeating once again my historic call so that this hope does not turn into disillusionment,” he noted.

In March, Ocalan declared a historic ceasefire after months of negotiations with the Turkish government.

In return, the PKK demanded amendments to the penal code and electoral laws as well as the right to education in the Kurdish language and a degree of regional autonomy.

But in September, the PKK announced they were planning to suspend the ceasefire after what they described as a disappointing reform package.

Under the reforms, Kurdish-language education will be permitted in private schools, and electoral candidates will be allowed to campaign in Kurdish.

The reforms also aim to ease rules that prevent pro-Kurdish and other smaller parties from entering the parliament.

In addition, towns can revert to their previous Kurdish names, and a quirky ban on the use of three letters of the Kurdish alphabet that do not exist in Turkish will be lifted.

Last week, Turkey’s parliament extended by a year a mandate authorizing the government to order military strikes against the PKK militants in Iraq.

All opposition parties, except for the pro-Kurdish BDP, supported the motion, which allows the Turkish government to launch cross-border operations against members of the outlawed group settled in northern Iraq.

The PKK has been fighting for an autonomous Kurdish region in southeastern Turkey since the 1980s. The conflict has killed more than 40,000 people.