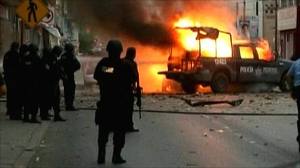 A vehicle filled with explosives has been found and removed safely in Lebanon’s capital city of Beirut, officials say.

The Lebanese army said the car was discovered in al-Maamura area of Beirut’s southern suburbs on Monday afternoon.

“The vehicle turned out to be rigged with explosives,” the military said, adding that the army experts defused it.

On August 16, the Lebanese government said the army has identified a network of suspected people trying to carry out bombings in southern Beirut.