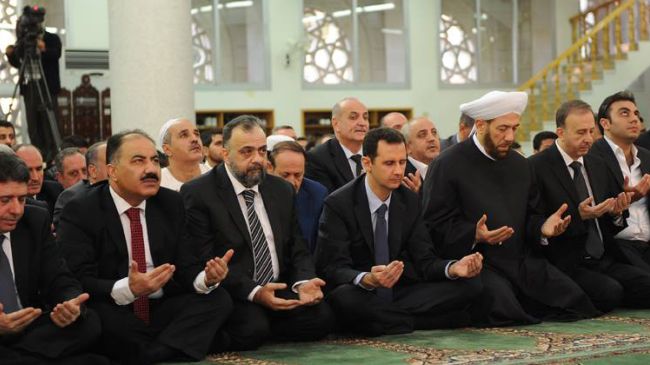 Syrian President Bashar al-Assad has attended a major prayer marking the Muslim feast of Eid al-Adha in the capital, Damascus.

Assad along with hundreds of worshippers uttered the Eid prayer at Hassibah Mosque on Tuesday.

After the prayer, people approached President Assad to shake hands with him and congratulate him on the Islamic feast.

Eid al-Adha is celebrated by Muslims across the world, commemorating the willingness of Prophet Abraham to sacrifice his son at God’s command. It marks the peak of the Hajj pilgrimage, during which pilgrims sacrifice sheep and cattle.

The Eid lasts up to three days and is a public holiday in Muslim countries.

More than two million Muslims, dressed in plain white clothes, have flooded Mina in Saudi Arabia, which is a valley outside the holy city of Mecca, to continue performing the Hajj rituals.

The Islamic ritual in the Syrian capital was held at a time when Syria is gripped by foreign-sponsored militancy.

According to the United Nations, more than 100,000 people have been killed in the turmoil that erupted in Syria over two years ago.