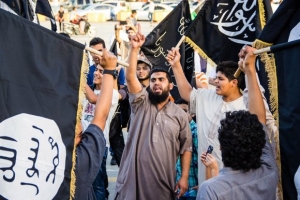 SHAFAQNA (International Shia News Association) – For the past 25 years Husam al-Beishi has run a tropical fish shop on Tripoli’s Al Rashid Street with a sideline in guns. This year he stopped selling the fish. “People just want the guns,” he said, as pistol shots crackled outside from customers testing his wares into the sky over the stalls selling Arab bread and canaries in cages. Specialising in Turkish 9mm pistols, Beishi says he is selling 40 a week, yet this is down from 100 a few months ago. “Now everyone in Libya has got a gun,” he laughed. It is not surprising that people feel the need for protection in a country so anarchic that even the prime minister can be abducted in the middle of the night from his room in a well guarded luxury hotel.

Two years after the fall of Colonel Muammar Gadaffi in a revolution that was supported by Nato air strikes led by Britain and France, Libya was meant to be a success story for interventionism. With a population of just 6.5m and rich in oil and gas that were quickly brought back on line, the country has none of the ethnic divisions of Afghanistan and Iraq. However, a weak government and a distracted international community have failed to create the forces of law and order to replace the security apparatus that served Gadaffi.

Far from disbanding the revolutionary groups that brought Gadaffi down, the authorities have let more spring up, among them criminals and unemployed youths who had nothing to do with the Arab spring. Tripoli now has a bewildering array of militias and defence committees, many with their own detention centres. Some are involved in gun running and the trafficking of drugs and alcohol. Political kidnappings and assassinations have become common. The nights pop with gunfire — as well as fireworks.

Just how lawless Libya has become was made clear to the world on Thursday with the news that Ali Zeidan, the prime minister, had been snatched at 5.15am from the luxury Corinthia Hotel into which he had moved after a raid on his office. The hotel is home to a number of ministers, the European Union delegation and the Qatari embassy. Zeidan, 62, a former diplomat and human rights lawyer, was rescued by local defence brigades after six hours in captivity. But confusion still surrounds who took him and how.

In an address to the nation on Friday Zeidan described his abduction as “an attempted coup” by those who want to turn Libya “into Afghanistan or Somalia”. Zeidan said a convoy of vehicles swarming with armed men had arrived at the hotel. “They came into my room and stole everything — my government papers, my clothes, even my underwear,” he said.

The men were from a group called the Libya Revolutionaries Operations Room, which was created out of several militias to be a security force for Tripoli. On its Facebook page the group said it had seized Zeidan “on the prosecutor’s orders” because he has dual nationality — he has a German passport from his 30 years in exile — which is not allowed for a prime minister. The prosecutor’s office denied it had issued such an order.

Zeidan was held at the base of another group, the Anti-Crime Unit, suggesting it was also implicated, a charge denied by Khalid Shanta, its head. He said six armed men — rather than 100, as was claimed — had been involved, adding: “We know who they are but no one has been arrested nor do I think they will be.” The incident came at the end of a week of turmoil that was sparked by the US special forces’ seizure of Anas al-Liby, a top al-Qaeda suspect.

Libyans were furious at this violation of their sovereignty. At a protest on Friday jihadist flags waved in the capital for the first time. Foreigners have been warned that they could be attacked in retaliation. The Operations Room claimed it snatched the prime minister because his government had agreed to the raid. Most believe the real motive of the abduction was political.

Zeidan was the compromise candidate in last year’s three- way election in which no one had wanted the heads of the two main parties: the Justice and Construction party, affiliated to the Muslim Brotherhood, and the secular National Forces Alliance. The transitional parliament, the General National Congress, has since spent most of its time trying to get rid of him rather than getting anything done.

In his speech Zeidan admitted that the situation was out of control. “Every day we have at least three protests at the government headquarters and they’re usually armed, asking for salaries,” he said. A few days before his abduction a group of armed men had stormed into his office to demand back pay and had refused to leave for hours.

In August Colonel Yussef Ali al-Asseifar, the military prosecutor in charge of investigating political assassinations, was himself killed by a car bomb. The situation is even worse outside Tripoli. Foreigners have mostly fled from the eastern city of Benghazi since Christopher Stevens, the American ambassador, was murdered last September in the US consulate by jihadi militiamen. Other militias have hampered oil production, cut water supplies running to the capital and forced power cuts.

Diplomats agree that the only solution is to train an army for the government. Next year 2,000 Libyans will be taken to the Bassingbourn barracks in Cambridgeshire. Trying to be positive, one western diplomat described last week’s events as “a wakeup call” that would force the political classes to work together.

Many Libyans are doubtful. “The situation is worse than ever,” said Majdi Khalid, 28, who in 2011 defied his family to join the revolutionaries fighting to topple Gadaffi. “We don’t have water or electricity a lot of the time because rebels seize the plants. My mother is a teacher and only has half a blackboard. Before, we were a police state. Now we have no police.”