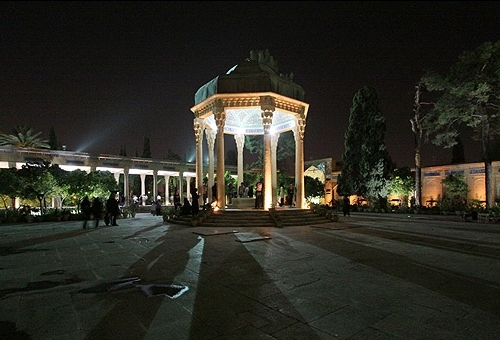 TEHRAN (FNA)- Iranians on Saturday commemorated the national day of Hafez Shirazi, a 14th-century Persian poet and mystic highly revered by not only Iranians, but also famous writers and scholars all across the world.

Very little credible information is known about Hafez’s life, particularly its early part. Immediately after his death, many stories, some of mythical proportions were woven around his life.

Khajeh Shamseddin Mohammad Shirazi was born in Shiraz in southwest Iran in approximately 1320 A.D., twenty two years before the birth of Chaucer and a year before the death of Dante.

When he began to write poetry he selected Hafez for his pen-name or ‘Takhallus’ ‘Hafez’ is the title given to one who has learnt the whole of the Koran by heart and Hafez claimed to have done this in fourteen different ways.

The renowned poet and mystic composed some 500 ghazals, 42 Rubaiyees, and a few Ghaseedeh’s over a 50-year-long span of his career. Hafez only composed when he was divinely inspired, and therefore he averaged only about 10 Ghazals per year. His focus was to write poetry worthy of the Beloved.

Ghazal is a short monorhyme consisting of successive couplets whose lines all end with the same refrain phrase, thus they form a rhyme scheme of aa, ba, ca, etc.

The major themes of Hafez’s ghazals are love, the celebration of wine and exposing the hypocrisy of those who have set themselves up as guardians, judges, and examples of moral rectitude.

The green fields of fate were fully grown

While the new moon’s sickle hung in the west.

I remembered the crops I had sown

It was now time for my harvest.

I said O fate, when will you awake?

The sun is up, it is now dawn-break.

Said, you have made many a mistake,

Yet keep hope and faith within your breast.

With integrity and with a pure heart,

Your brightness will give a new start

To the sun, even shinning at its crest.

Don’t seek your guidance in the skies

It is deceitful, though it seems wise.

It helped many kings majestically rise

Then brought them down at its own behest.

Though many jewels and rings of gold,

Necks and ears of many elegantly hold;

All the good times will one day fold.

With a clear mind listen, and a beating chest.

Don’t sell the harvest that you reap

In the market of love, for so cheap;

For the moon, a nickel you keep,

And for the stars a dime at best.

From evil eyes may you be freed;

Hypocrites ruin their own creed and nest

Hafiz leaves without his dervish’s vest.