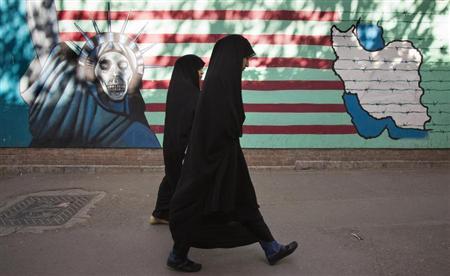 (Reuters) – While Iranian President Hassan Rouhani tries to ease friction with the United States, chants of “death to America” on Friday may deepen doubts in the West that Tehran is ready for a deal as talks on its nuclear program resume next week.

It also won him the guarded support of Supreme Leader Ayatollah Ali Khamenei, the most important power center in Iran.

But conservative hardliners in the Islamic Republic’s complex political establishment have picked up on reservations expressed by Khamenei and begun a rearguard campaign to put the brakes on Rouhani’s diplomatic opening.

Debate has mounted inside Iran on the speed and extent to which the Islamic Republic should attempt to patch up its many quarrels with the West, and the United States in particular.

Rouhani’s visit to the United Nations last month was capped by a telephone call from U.S. President Barack Obama, the first time the presidents of the two nations had spoken directly since the 1979 Islamic Revolution toppled the U.S.-backed shah.

Former president Akbar Hashemi Rafsanjani, a prominent Rouhani backer, said earlier this month that he saw no value in chants calling for death to countries or individuals.

An editorial in a moderate newspaper argued that it was time for the habitual chants of “death to America” to go the same way as the slogans of “death to the Soviet Union” and “death to China” which were abandoned shortly after the revolution.

“America is the great satan,” he told worshippers at Tehran University, the main venue for Friday prayers in Iran.

“During the last 35 years has this evil become less or more? If yesterday in the arena of conspiracies against Iran, American was a snake, it is now a poisonous serpent. Any conspiracy that is directed against Iran stems from America,” Fars news agency quoted him as saying.

“According to this logic we say death to America. And Americans …. should know that this slogan is the secret of Iran’s resistance and for as long as there is American evil, this slogan will endure across the nation of Iran.”

Though Khamenei is Iran’s ultimate authority on all matters of state, especially the nuclear file, there is often a vigorous debate between his subordinates in the government, parliament and security apparatus that frequently spills into the public arena before the clerical supreme leader gives his final word.

A stir was created this week by an article in a hardline conservative newspaper quoting Rouhani’s foreign minister as saying his conversation with Obama had been a mistake.

Foreign Minister Mohammad Javad Zarif denied saying any such thing, and said that he spent a few hours in hospital after suffering spasms of pain on reading the article on Tuesday.

Zarif is to lead Iran’s negotiating team in talks with six major world powers in Geneva next week, the first round of negotiations since Rouhani’s election breathed new hope into decade-old talks on Iran’s nuclear program.

“A great job awaits us next week, and it needs internal consensus and national rapport more than anything,” Tasnim news agency quoted Zarif as saying on Friday.

The United States wants Iran to respond to proposals by world powers in February as a starting point for the talks.

Britain, China, France, Russia and the United States – the five permanent members of the United Nations Security Council – plus Germany, the so-called P5+1, said in February they want Iran to stop enrichment of uranium to 20 percent, ship out some stockpiles and shutter a facility where such enrichment is done.

In return, they offered a relaxation of international sanctions on Iran’s petrochemicals and trade in gold and other precious metals. For its part, Iran has called on the six powers to come up with a new, more attractive offer.

Western powers believe Iran’s enrichment activities are aimed at establishing the means to build nuclear weapons. Iran insists its program is purely for civilian purposes – generating electricity and for a medical research reactor.