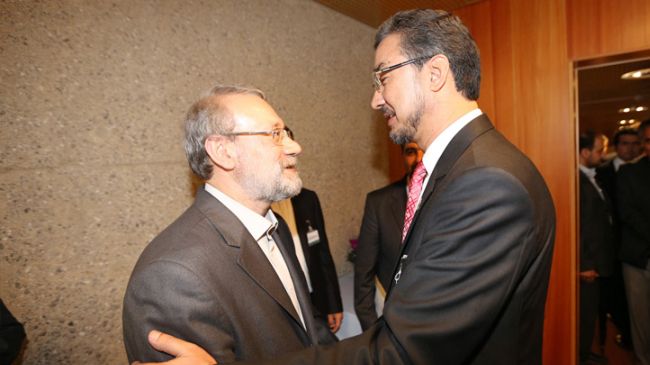 “We always make efforts for [helping establish] security in Afghanistan,” Larijani said in a meeting with his Afghan counterpart Abdul Rauf Ibrahimi on Wednesday on the sidelines of the 129th Inter-Parliamentary Union (IPU) Assembly in Geneva.

“The Islamic Republic of Iran will do its utmost for the establishment of stability in Afghanistan,” said Larijani.

The establishment of democracy in the war-wracked country can help its development as well, said the Iranian parliamentarian.

Ibrahimi, for his part, praised Iran’s support for Afghanistan, adding that the two neighboring countries will stand by each other as they share numerous commonalities.

He expressed hope that Iran will further contribute to the establishment of lasting peace in Afghanistan.

Iran, an immediate neighbor of Afghanistan, has called for a regional solution to the Afghan crisis and blamed the growing insecurity and drug trafficking in Afghanistan on the foreign military presence in the country.

In a separate meeting with Ecuadorian Parliament Speaker Gabriela Rivadeneira, Larijani stressed the expansion of economic relations between Iran and the Latin American country, saying Iran’s Majlis was also keen to bolster its relations with Ecuador’s parliament.

He said certain entities have been trying to put pressure and slap sanctions on Iran to dissuade it from developing its civilian nuclear energy program, but to no avail.