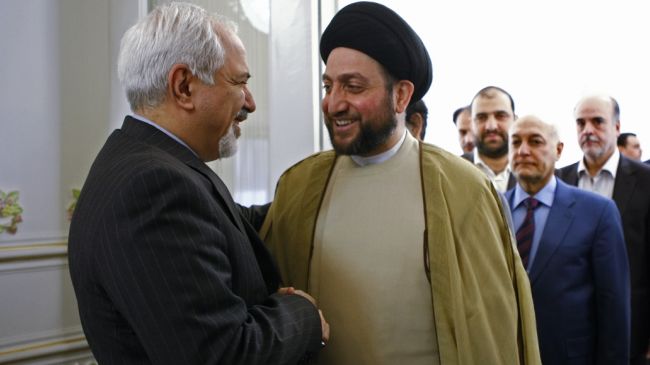 In a meeting with Chairman of the Islamic Supreme Council of Iraq Ammar Hakim in Tehran on Tuesday, Zarif underscored the high potential of the Iraqi government in playing a constructive role in major regional and international issues.

The Iranian foreign minister also referred to the significant position of clerics and religious figures in Iraq, and hailed Hakim’s effective and constructive role in forging unity among Iraqi political groups and factions.

Zarif stressed the need for the preservation of Iraq’s national unity in the wake of emerging challenges in the Arab country.

He lamented the spread of terrorist attacks across Iraq, which has left a large number of innocent Iraqi civilians killed, and strongly condemned such acts of terror.

He said that Iran supports the measures undertaken by the Iraqi government to fight against terrorism.

Hakim, for his part, touched upon the influential position of Iran, as a country with a rich civilization, in leading and sensitive regional and international developments.

He expressed hope that Iran’s effective role in the establishment of global peace, stability and security would further bolster during the tenure of the incumbent Iranian administration.

The senior Iraqi official also said constructive and confidence-building talks between Iran and the West will strengthen regional stability and security.