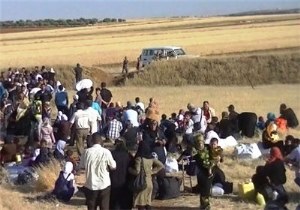 The United Nations has estimated that more than four million more Syrians will be forced out of their homes in 2014 by the escalating conflict in the country, reports say.

The UN said it expects two million Syrians to take refuge outside the country while another 2.25 million others are predicted to be internally displaced in the next year, Reuters reported on Monday.

The new figures follow a meeting of officials from 10 UN agencies, the International Organization for Migration, and 18 other aid groups in the Jordanian capital Amman on September 26 so as to adopt a policy for the year 2014.

“The most likely scenario was perceived to be continuation and escalation of the conflict with increased fragmentation, disruption of essential services, and further erosion of coping mechanisms,” said officials from the UN office for the Coordination of Humanitarian Affairs (OCHA) at the meeting.

The report added that the number of refugees was expected to reach 3.2 million by December 2013, around one million more than the current figure.

The UN predicts that 8.3 million Syrians will be in need of aid next year. UN agencies are preparing to initiate a new appeal for aid in order to assist victims of the conflict.

Also on Monday, Jordanian Interior Minister Hussein al-Majali said that there is not enough international aid for 1.3 million Syrian refugees inside Jordan.

Majali added that 146,000 Syrian refugees live in camps and the rest in cities, towns, and villages of the country.

In a recent statement, the United Nations High Commissioner for Refugees said the number of Syrian refugees, who have fled the country’s conflict, reached two million.