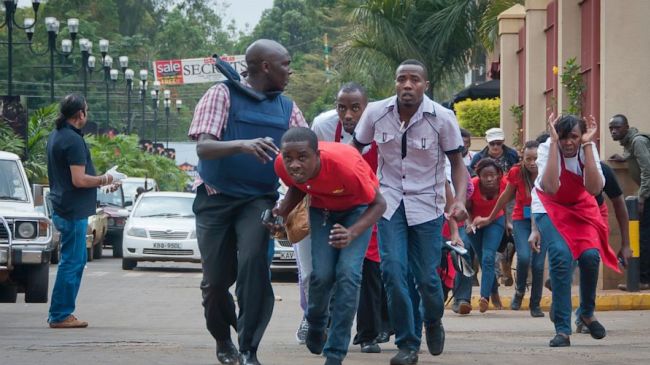 NAIROBI, Kenya (AP) — A military spokesman on Saturday confirmed the names of four men implicated in the attack on an upscale mall in Kenya’s capital last month, an assault that turned into a four-day-long siege and killed at least 67 people.

“I confirm those are the names of the terrorist,” he said, in a Twitter message sent to The Associated Press.

The identities of the men came as the private TV station in Nairobi broadcast closed circuit television footage from Westgate mall.

The footage shows no more than four attackers. They are seen calmly walking through a storeroom inside the complex, machine guns strapped to their torsos. One of the men’s pant legs appear stained with blood, though he is not limping, and it is unclear whose blood it is.

The footage appears to contradict earlier government statements indicating 10 to 15 attackers were involved in the Sept. 21 attack, although the footage may not show all of the assailants that took part.

It’s not yet known if the four shown managed to escape, or if they were killed by security forces reacting to the scene.

Terrified shoppers hid behind mannequins, inside cardboard boxes, in storage rooms, in ventilation shafts and in the parking lot underneath parked cars during the attack, many hiding for hours before help arrived.

Al-Shabab, al-Qaida’s affiliate in neighboring Somalia, claimed responsibility for the assault, saying it was revenge for Kenya’s 2011 military intervention in Somalia, which was aimed at flushing out the extremists.

Little is known about the identities of the attackers beyond their names.

Matt Bryden, the former head of the United Nations Monitoring Group on Somalia and Eritrea and a top expert on al-Shabab, said via email that al-Kene and Umayr are known members of al-Hijra, the Kenyan arm of the Somali militant group.

He said Nabhan may be related to the late al-Qaida operative Saleh Ali Saleh Nabhan – an alleged plotter in the 1998 bombings at U.S. embassies in Kenya and Tanzania that killed more than 250 people. He was killed in a 2009 Navy SEAL strike in the town of Barawe in Somalia.

But Bryden also cautioned that Nabhan is a common coastal name in Kenya, so there may be no link to the al-Qaida leader.

Both officials insisted on anonymity to discuss intelligence matters.