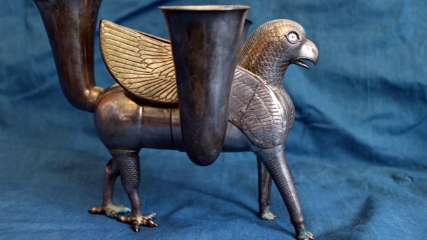 The National Museum of Iran (NMI) is planning to make documentary about the 2700-year-old Persian griffin returned by the United States to the country.

After collecting all data about the ancient silver chalice, the documentary will be made to depict the story of this Persian relic that is currently kept in the National Museum, the museum director Mahnaz Gorji announced.

The artifact which is very precious to the Iranian nation as a symbol of the ancient civilization of the country was stolen by looters from the Kalmakarra Cave, in the western highlands of Iran between 1989 and 1992.

Then, it was seized by the US custom officials from a smuggler in 2003 and kept in a customs warehouse ever since.

Last week, the US has returned the ancient silver chalice during President Hassan Rouhani’s visit to New York to attend the 68th Session of the United Nations General Assembly.

The artifact is a ceremonial cup depicting a griffin, a so-called mythical creature with the body of a lion and the head and wings of an eagle, described in many cultures around the world.

It was made around 700 BCE during the pre-Achaemenid period before the establishing of the first Persian Empire by Cyrus the Great.