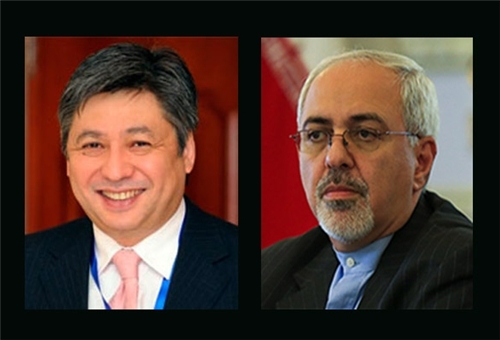 TEHRAN (FNA)- Kyrgyz Foreign Minister Erlan Abdyldaev, in a meeting with his Iranian counterpart Mohammad Javad Zarif, asked for the start of direct flights between Tehran and Bishkek in a move to further facilitate trade and economic interactions between Iran and Kyrgyzstan.

During the meeting held on the sidelines of the 68th United Nations General Assembly Session in New York on Saturday, Zarif and Abdyldaev discussed ways to further broaden bilateral ties between the two Muslim nations.

The Kyrgyz top diplomat voiced pleasure in the enhancement of Tehran-Bishkek ties in various political, trade and economic fields as a result of exchange of delegations between the two states in recent years, and called for the start of direct flights between the Iranian and Kyrgyz capitals to pave the ground for facilitated interactions between the two nations’ traders and officials.

He also called on Iranian companies to widen partnership in Kyrgyzstan’s construction and investment projects.

Zarif, for his part, welcomed his counterpart’s offer for lunching Tehran-Bishkek direct flights, and said incrased cooperation in transit and transportation between the wo states would promote economic cooperation, convergence and prosperity among the regional countries, adding that start of direct flights between Tehran and Bishkek would play a construtive role in facilitating trade and promoting ties between the two nations.

Earlier this month, Iranian President Hassan Rouhani, in a meeting with his Kyrgyz counterpart Almazbek Atambayev, underlined his administration’s political will to expand bilateral ties and mutual cooperation with Kyrgyzstan.

During the meeting in Bishkek on the sidelines of the Shanghai Cooperation Council (SCO), President Rouhani expressed the hope that the two countries would further boost their cordial relations in all areas of mutual interest.

During the meeting, the Iranian and Kyrgyz presidents also exchanged views on ways of forging closer cooperation and the latest regional developments.

The Kyrgyz president, for his part, said that his country sought close partnership with Iran, specially in the economic fields.

“I hope that Tehran and Bishkek will work together closely to further bolster bilateral relations,” President Atambayev said.