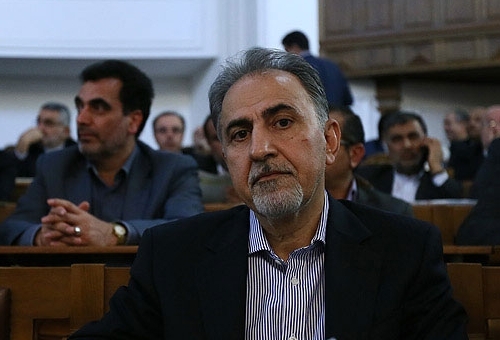 Najafi: US hands over ancient Iranian griffin to show goodwill

Tehran, Sept 28, IRNA — Head of Cultural Heritage, Tourism and Handicrafts Organization Mohammad Ali Najafi said on Saturday that the US handed over a 2,700-year-old Persian silver drinking cup, cast in the form of a griffin (Shir Dal) to show goodwill. The artifact had been taken out of Iran unlawfully.

They delivered the griffin dating back to Mades Dynasty to the President and said they hand over the griffin as a gift to Iranian nation, he said.

Last Thursday the US State Department officials contacted Iranian delegation and said that they have considered one gift for Iranian nation, he said.

The US officials presented the ceremonial drinking vessel belonging to the 7th century BC to Iran as a token of goodwill.

The ancient vessel had been in New York since 2003, when an art dealer had smuggled it out of Iran.

They said that they had preserved it to give it back to Iran on a suitable opportunity, he said.

The griffin is a legendary creature with the body, tail, and back legs of a lion; the head and wings of an eagle; and an eagles talons as its front feet. As the lion was traditionally considered the king of the beasts and the eagle was the king of the birds, the griffin was thought to be an especially powerful and majestic creature.

The griffin was also thought of as king of the creatures. Griffins are known for guarding treasure and priceless possessions.
According to US officials, the griffin dated back to 700 years Before Christ (BC) simultaneous with Achaemenid Empire in the year 2003. An Arab took the griffin to US through Switzerland and sold it to dlrs. 950,000 as a Syrian article, Najafi said.

The historic griffin will be handed over to Iranian national museum, he said.