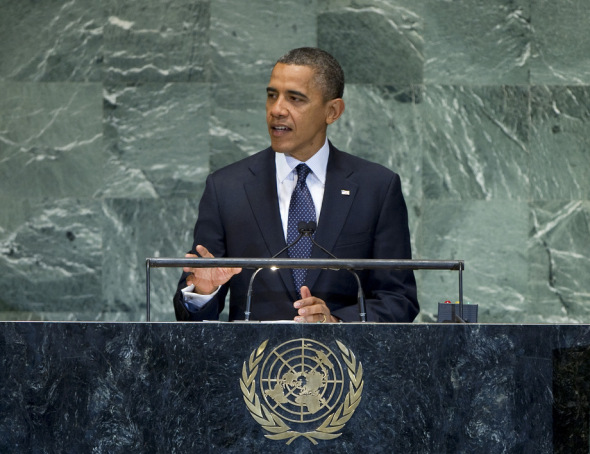 Historical phone call. the optimism for US, Iran

WASHINGTON (AP) — The Iranian president, his visit to the U.S. nearing its end, makes contact with the White House. As his car inches through New York’s snarled traffic, he hears Barack Obama’s voice on the phone as the U.S. president sits at his desk in the Oval Office.

And with that, a generation-long rift between the U.S. and Iran is that much closer to being bridged.

Iranians awoke Saturday to learn that their president, Hassan Rouhani, had spoken directly to Obama, breaking through a barrier that had left American and Iranian presidents divorced from such contact for 34 years. The two presidents pledged to resolve concerns about Iran’s nuclear ambitions, which have isolated Iranians from the global community and led to crippling economic sanctions.

Upon his arrival home to Tehran, the Iranian president was met by both cheering supporters and opposition hardliners who tried to block his motorcade.

Several dozen protesters shouted “Death to America” and at least one reportedly hurled a shoe, a gesture of contempt. Supporters, meanwhile, greeted Rouhani with cheers and placards praising his peace efforts.

The appetite for serious talks having been tested at a presidential level, the focus turns to negotiations among foreign ministers and other officials from the five permanent members of the U.N. Security Council plus Germany, who together will chart a path forward, a senior Obama administration official said. The group wants Iran to present a more detailed proposal before or at the next round of negotiations, scheduled in Geneva on Oct. 15-16, another U.S. official said.

Rouhani’s aides initially reached out to arrange the call, said officials, who weren’t authorized to comment by name and demanded anonymity. But it was Obama who signaled days earlier he was willing to meet with his Iranian counterpart.

By the end of the call, Obama was suggesting that a breakthrough on the nuclear issue could portend even deeper ties between the U.S. and Iran, a notion that would have seemed unfathomable in recent years, when Rouhani’s predecessor was describing America in satanic terms.

The telephone call capped a week of seismic shifts in the relationship while Rouhani was in the U.S. for an annual U.N. meeting. Obama had left open the possibility of an exchange with Rouhani, but the Iranian later said the timing wasn’t right.

But hours before the phone call, at a news conference in New York, Rouhani linked the U.S. and Iran as “great nations.” And the night before, U.S. and European diplomats were hailing a “very significant shift” in Iran’s attitude and tone in the first talks on the nuclear standoff since April.

“While there will surely be important obstacles to moving forward, and success is by no means guaranteed, I believe we can reach a comprehensive solution,” Obama told reporters Friday at the White House.

The shift in tone aside, there was immediate skepticism that Iran was cynically seeking to procure relief from economic sanctions but would not take concrete action to assuage global concerns that it is seeking to build nuclear weapons.

The U.S. and Western allies imposed the sanctions after years of stonewalling inspections and secrecy about its activities fueled fears about its intentions – especially as they relate to Israel, a staunch U.S. ally and the target of much of Iran’s most fiery rhetoric. Iran insists its nuclear program is strictly for peaceful purposes.

House Majority Leader Eric Cantor, R-Va., criticized Obama for failing to pressure Rouhani on Iran’s support for Islamic extremist groups and on human rights issues. He said the U.S. is fooling itself if it thinks that Rouhani, who took office in August after running on a more moderate platform, isn’t beholden to Iran’s supreme leader, Ayatollah Ali Khamenei, who controls matters of state, including the nuclear program.

For Obama, the call marked a realization of sorts of a stance he took in 2008, when he was first running for president and saying he would be willing to meet with leaders from so-called rogue nations like Iran, Syria and North Korea without preconditions. The policy earned him rebukes from critics who questioned what they derided as a Pollyanna approach to security threats.

Five years later, the man behind the White House podium was otherwise deeply ensnared in a dysfunctional stalemate with lawmakers over spending and health care. Announcing the diplomatic leap forward, Obama sought solace in foreign policy as he condensed the hopes and challenges of what remains of his presidency – from historic outreach to Iran, to budding progress on Syria’s chemical weapons, to the untidy work of dealing with Congress.

The offer on the negotiating table for Rouhani would give Iran some sanctions relief and pledge not to impose new penalties in exchange for ending uranium enrichment that nears or reaches 20 percent, a level just a few steps from what’s needed to produce fuel for an atomic weapon. The deal, offered last February, would also require suspended enrichment at Iran’s fortified underground Fordo facility and increased access for U.N. inspectors.

Obama said that the U.S. will coordinate closely with its allies – including Israel, which considers a nuclear-armed Iran to be an existential threat. Officials also said the U.S. had informed Israel about the call with Rouhani.

Israel’s lingering doubts that Iran’s overtures are anything more than a stall tactic will be on display next week, when Obama meets with Israeli Prime Minister Benjamin Netanyahu at the White House.