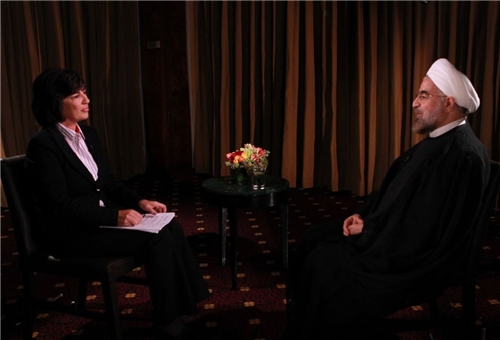 A political commentator has slammed CNN for broadcasting a falsified translation of its recent interview with Iranian President Hassan Rouhani, calling it part of the news network’s scenario for misleading the world’s public opinion.

On Tuesday, September 24, CNN’s Christiane Amanpour conducted an interview with President Rouhani on the sidelines of the 68th annual session of the UN General Assembly in New York. The news network broadcast a mistranslation of President Rouhani’s remarks about his position on the Holocaust.

In a Friday article, Seyyed Mostafa Khoshcheshm, the editor-in-chief of the English Service of Fars News Agency, lashed out at CNN and Amanpour for passing the blame for the mistranslation on the interpreter and refusing to offer an apology with the aim of “misinforming the public.”

“They insist on insulting the public understanding, unless we come to believe that CNN and its host are so lost that they are not acquainted with professional courtesy, honesty, trustworthiness, truthfulness, and professionalism,” he added.

Responding to a question regarding the Holocaust, President Rouhani said, “I’ve said before that I am not a historian and the historians should elaborate on and explain the dimensions of historical events.” However, CNN wrongly inserted the word “Holocaust” in the translation it rendered instead of the words bolded.

CNN also quoted Rouhani as saying, “Whatever criminality they (the Nazis) committed against the Jews, we condemn. The taking of human lives is contemptible,” while the Iranian president had not uttered the sentences.

The news network has refused to offer an apology or explanation over the falsification in the translation, claiming that the translator had been assigned by President Rouhani’s companions.

Khoshcheshm censured CNN for its refusal to redress the situation and merely passing the blame onto the translator, noting, “Do they not owe an apology to the public opinion, and not just to the people of Iran, but to the Americans and the rest of the world, specially the tens of the world media outlets that misinformed their nations just on the basis of a wrong broadcast?”

“Even if we accept that CNN is not to be blamed for the wrong translation, we cannot ignore the fact that the network should have first fulfilled its vital responsibility for checking the veracity, authenticity and trustworthiness of the translation of the remarks of the president of a country about such an important issue as the recognition or rejection of the Holocaust, especially when it is the president of the Islamic Republic of Iran speaking about this topic,” the analyst added.

He argued that as CNN itself confesses to the untrustworthiness of the translation, it is professionally responsible to firstly apologize for the mistake and secondly rebroadcast the interview with “a proper translation.”

Khoshcheshm pointed out that the two steps are “the least thing the American network can do to make up for its gross mistake, instead of whitewashing what otherwise would be the purposeful falsification of the remarks and views of the president of a world state and projecting the blame on others.”