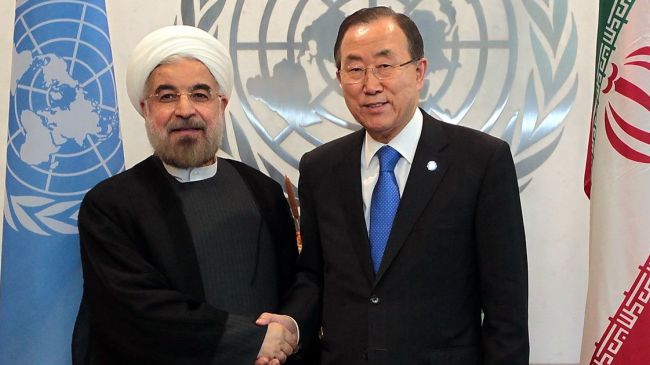 Iran’s President Hassan Rouhani and UN Secretary General Ban Ki-moon have met and exchanged views on different issues on the sidelines of the UN General Assembly session in New York.

The two discussed the crisis in Syria and the issue of chemical weapons as well as humanitarian efforts in the region.

Ban also briefed the Iranian president on developments regarding the upcoming international Geneva II conference on the Syria crisis.

They also weighed in on climate change, human rights and a host of regional issues.

On May 7, Russia and the US agreed in the Russian capital Moscow to convene an international conference on Syria, which will serve as a follow-up to an earlier Geneva meeting held in June 2012.

However, the date of the event keeps slipping as Syria’s foreign-backed opposition coalition remains divided over taking part in the second round of Geneva talks. They have repeatedly refused to take part in the conference unless Syrian President Bashar al-Assad steps down.

The Syrian government has already announced that it is ready to take part in the peace conference without any preconditions in an effort to help end over two years of deadly turmoil in the country.