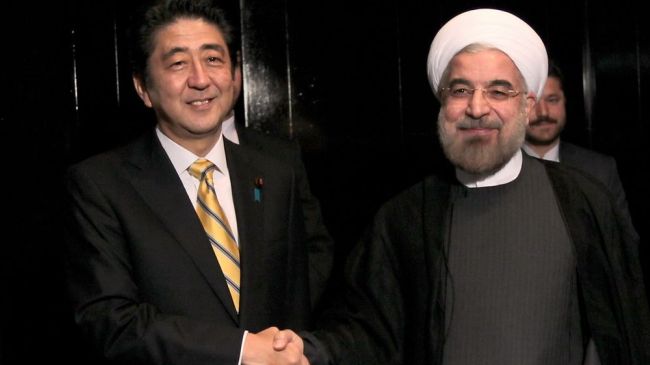 During a meeting on the sidelines of the 68th annual session of the UN General Assembly in New York on Thursday, the pair explored avenues for the advancement of relations between the two countries in diverse areas, particularly in the fields of economy and culture, and exchanged viewpoints on major regional and international developments.

“There are many good grounds for the investment of Japanese firms in Iran. We are ready to increase our cooperation and consultation with Tokyo in different fields, including environment protection and the campaign against narcotics,” Rouhani stated.

The Iranian president also expressed hope for the resolution of the West’s nuclear standoff with Tehran in the shortest possible time.

He reiterated the peaceful nature of Iran’s atomic activities, noting that the Islamic Republic’s nuclear energy program is under full International Atomic Energy Agency (IAEA) supervision and within the framework of the Non-Proliferation Treaty (NPT).

Rouhani termed the US-engineered sanctions imposed on the Iranian nation as illegal and inhuman, expressing hope that the sanctions would be soon lifted. Turning to the crisis in Syria, Rouhani stated that Tehran will utilize all its effort and influence to end the deadly conflict in the Arab country.

Abe, for his part, praised Rouhani’s policies on interaction and friendly ties with world countries, expressing hope that nuclear issue would be resolved as soon as possible.

He stated that Tokyo is optimistic about the expansion of all-out ties with Tehran within the framework of international relations.

The Japanese prime minister also touched upon the Syrian crisis and the use of chemical weapons there, voicing his country’s serious concern over threats posed by chemical warfare and the weapons of mass destruction.