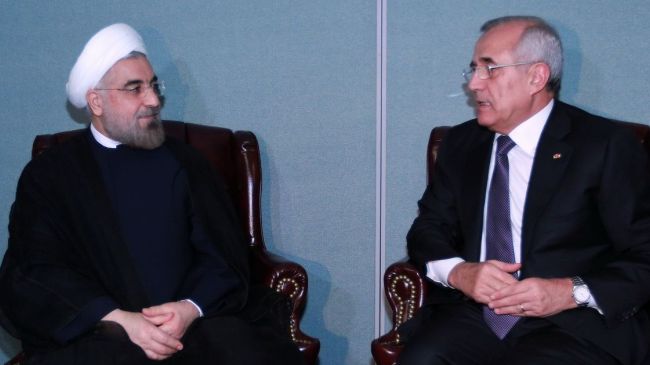 Iran’s President Hassan Rouhani has expressed concern over the deplorable situation in Syria and the use of chemical weapons, urging all regional states to push for a solution to end the civil strife in the Arab country.

“All regional countries should make efforts to end the civil war in Syria,” Rouhani said in a meeting with his Lebanese counterpart Michel Suleiman in New York on Wednesday on the sidelines of the 68th Session of the UN General Assembly.

On August 21, hundreds of people were killed in a chemical attack on the outskirts of Damascus. The militants in Syria accused the government of having been behind the attack; however, Damascus categorically rejected the claim, saying that the militants themselves had carried out the gas attack as a false flag operation.

He also expressed Iran’s support for the Lebanese resistance, and called for adopting measures to fight terrorism.

The Lebanese president, for his part, expressed hope that Tehran and Beirut would further expand relations in various fields.

In a separate meeting with his Turkish counterpart Abdullah Gul, the Iranian president said joint cooperation among regional countries to resolve the Syrian crisis would serve the interests of all nations.

“Iran and Turkey have numerous common interests and goals in the region, which should be utilized to improve their relations,” Rouhani added.

He noted that Tehran-Ankara cooperation will play an important role in resolving regional problems, calling for efforts to prevent the escalation of tensions in Syria and settle the Arab country’s woes.

The Iranian chief executive emphasized that terrorism poses a danger to the entire Middle East, and added that every attempt should be made to force the terrorist groups out of Syria.

The Turkish president, for his part, said Iran plays a constructive role in resolving regional problems and urged all countries in the Middle East to forge closer cooperation in order to end the crisis in Syria.