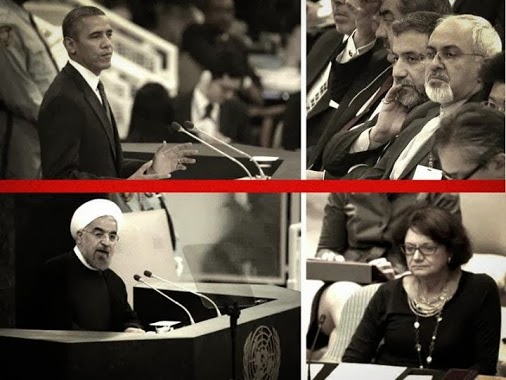 Iranians criticize US FM absence during Rouhani’s speech at UNGA

Though president Obama emphasized in his speech at the UN General Assembly that he “firmly” believes “the diplomatic path [with Iran] must be tested,” the absence of the US mission at President Hassan Rouhani’s speech was highly criticized by Iranians.

Iranian described this absence contradictory with what President Obama said in his own words, that “conciliatory words will have to be matched by actions.”

Having been considered as “giving a cold shoulder”, some of the social network users in Iran highly criticized the US mission behavior and expressed their skepticism of the US intentions.

Some others also addressed the Obama, responding his words of “We are not seeking regime change” with a statement of Iran’s supreme leader, Ayatollah Khamenei.

In the first day of Iranian New year in March 2013, Ayatollah Khamenei referred to the us messages and words stating “the US is not seeking regime change in Iran,” and said: “The answer is that we are not concerned about whether or not you have intentions of overthrowing the Islamic Republic although you constantly insist that you do not have such intentions. Even the day when you had intentions of overthrowing the Islamic Republic and you announced this openly, you could not do anything, and you will not be able to do anything in the future either.”