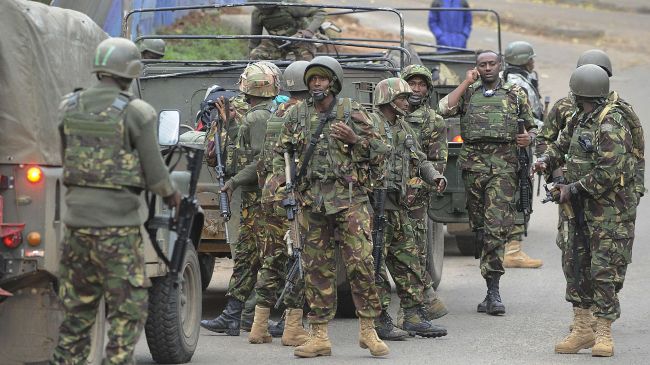 Kenya Defense Forces (KDF) arrive on September 22, 2013 at the Westgate mall in Nairobi.

Heavy gunfire and explosions have been heard from Nairobi’s Westgate shopping mall as Kenya’s security forces launch a ‘final assault’ against Somali gunmen inside the complex.

Witnesses said that three loud explosions were heard at the mall during the early hours of Monday.

The Monday explosions came after a continued outbreak of gunfire that lasted around 15 minutes.

The Kenyan military said earlier that it has rescued “most” of the hostages who were held captive by Somalia’s al-Shabab fighters inside the shopping mall.

Kenya Defense Forces (KDF) spokesman Cyrus Oguna said the “security forces have taken control of most parts of the building.”

According to reports, the dead included three British nationals, two French women, two Canadian citizens – including a diplomat – a Chinese woman, two Indians, a Ghanaian poet, a South Korean, a South African and a Dutch woman.

Kenyan police warned that the death toll could rise “much higher.”

“This will end tonight. Our forces will prevail. Kenyans are standing firm against aggression, and we will win,” said Kenya’s Disaster Operations Center in a message on its Twitter page.

According to police, 10 to 15 heavily armed al-Shabab members stormed the mall from two sides on September 21.

Al-Shabab has claimed responsibility for the assault and warned the Kenyan government to withdraw its troops from Somalia.

On Sunday, Kenyan President Uhuru Kenyatta said in a televised speech, “The criminals are now all located in one place within the building… We have as good a chance to successfully neutralize the terrorists as we can hope for.”

A Kenyan security official, speaking on condition of anonymity, has confirmed that Israeli troops were involved in the operation against the Somali gunmen.

In another statement posted on Twitter on Sunday, al-Shabab said Kenyan officials were asking the hostage-takers to negotiate.

“We’ll not negotiate with the Kenyan govt. as long as its forces are invading our country, so reap the bitter fruits of your harvest,” the statement read.