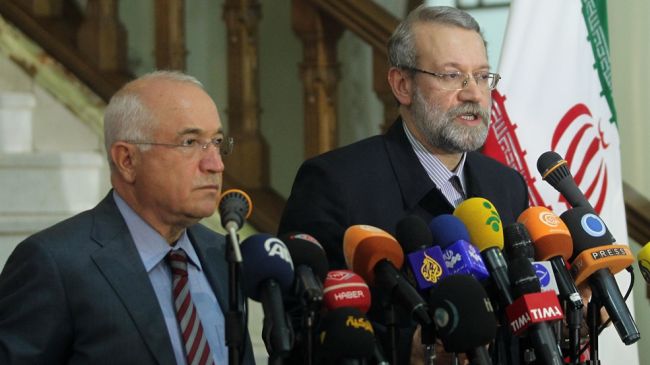 Iran’s Majlis Speaker Ali Larijani says Tehran and Ankara agree on the need for reforms in Syria and an end to terrorist acts in the Arab country.

“Fortunately, the Islamic Republic of Iran and Turkey share a common stance on the ugly issue of terrorism, and both countries believe reforms on the basis of democracy will solve the problems in Syria,” Larijani said after his talks with visiting Turkish Parliament Speaker Cemil Cicek in Tehran late on Saturday.

Larijani said the officials of Iran, Iraq, and Turkey have agreed to find a political solution to the crisis in Syria, expressing hope that Cicek’s visit will help settle regional issues.

The Turkish parliament speaker, in turn, said the crimes committed by Takfiri terrorists in Syria and other extremists in the region are against Islam, human principles and human rights.

Cicek arrived in Tehran earlier on Saturday at the head of a high-ranking parliamentary delegation upon an invitation from his Iranian counterpart Ali Larijani.

During his two-day trip, Cicek is to sit down with senior Iranian officials, including President Hassan Rouhani, to discuss ways to bolster Tehran-Ankara relations as well as the recent developments in the region, specifically the crisis in Syria.

Syria has been gripped by deadly unrest since March 2011, with the UN High Commissioner for Refugees putting the number of Syrian refugees at two million.

The UN refugee agency further said some 4.2 million people have also been displaced inside Syria since the beginning of the conflict in the Arab country.

Earlier in the week, Rouhani announced Tehran’s readiness to help facilitate dialog between the Syrian government and the opposition, and called for collective efforts to pave the way for national dialog in regional countries.

The proposal was met with a warm welcome from German Chancellor Angela Merkel, who demanded that it be translated into action.