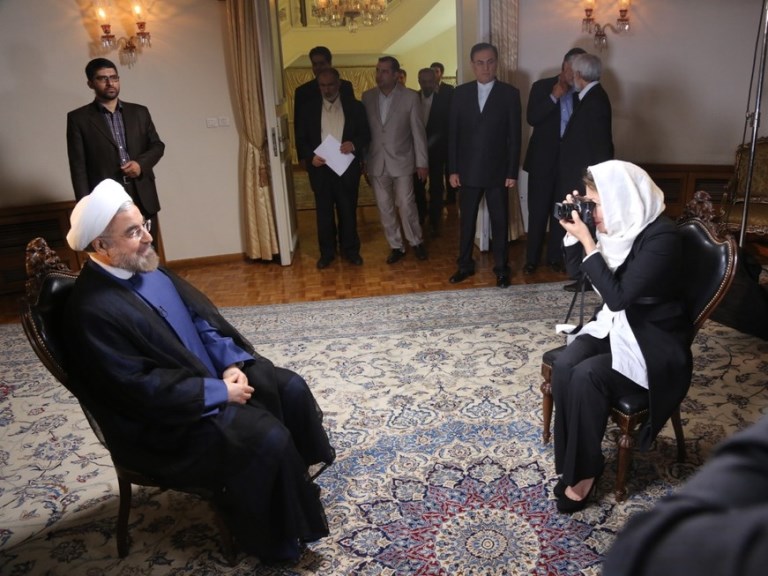 In his first American television interview, President Hassan Rouhani signaled an interest in improving relations with the United States. Less than a week earlier, President Barack Obama revealed that he had privately communicated with Iran’s new president. Rouhani described the tone of Obama’s letter as “positive and constructive” in his interview with NBC.

On domestic issues, Rouhani reiterated his support for freedom expression and opposition to extensive censorship. “People must have full access to all information worldwide,” he said. Rouhani’s interview came less than week before his debut at the United Nations General Assembly, scheduled for September 24. The following are excerpts.
U.S.-Iran Relations

“From my point of view, the tone of the letter [from President Barack Obama] was positive and constructive. It could be subtle and tiny steps for a very important future. I believe the leaders in all countries could think in their national interest and they should not be under the influence of pressure groups. I hope to witness such an atmosphere in the future.”
Nuclear Program
“We have never pursued or sought a nuclear bomb and we are not going to do so. We have time and again said that under no circumstances would we seek any weapons of mass destruction, including nuclear weapons, nor will we ever… We solely are looking for peaceful nuclear technology.
“In its nuclear program, this government enters with full power and has complete authority. We have sufficient political latitude to solve this problem.”
Syria
“We are not the government of Syria. We are one of the countries of this region which is asking for peace and stability and the elimination of all weapons of mass destruction in the entire region.”

“We consider war a weakness. Any government that decides on war, we consider a weakness. And any government that decides on peace, we look on it with respect for peace.”
Domestic Freedoms and Rights
“We want the people in their private life to be completely free. In today’s world, having access to information and the right of free dialogue and the right to think freely is the right of all people, including the people of Iran.”
“The viewpoint of the government is that people must have full access to all information worldwide. Our opinion on this should be based on the protection of our national identity and on our morals.”
The Middle East
“What is important for us is that the countries of the region and the people grow closer to each other and that they are able to prevent aggression and injustice.”’
“What we wish for in this region is rule by the will of the people,” he said. “We believe in the ballot box. We do not seek war with any country. We seek peace and friendship among the nations of the region.”
Israel
Israel is an “occupier” nation that “does injustice to the people of the region and has brought instability to the region with its war-mongering policies… [Israel] shouldn’t allow itself to give speeches about a democratically and freely elected government.”