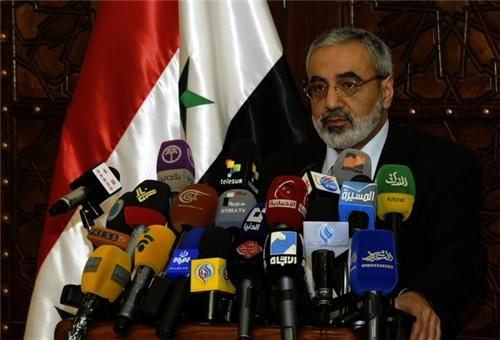 TEHRAN (FNA)- Damascus is committed to act on the stockpile of chemical weapons in Syria based on UN decisions, Syria’s information minister said.

“Syria is committing itself to whatever comes from the UN,” Omran al-Zoubi told Britain’s ITN television on Monday.

“We accept the Russian plan to get rid of our chemical weapons. In fact we’ve started preparing our list”.

“We are already documenting our papers and we have started to do our job,” he added.

Under the breakthrough agreement reached in Geneva Saturday, Syria will provide an inventory of its chemical arsenal within one week and hand over all of the components of its program by mid-2014.

The Russia-proposed deal has been welcomed by many countries, as concerns were on the rise in the region with US threatening to bomb Syria amid the bloody insurgency which has been going on for more than two years with no end in the sight.

The first official Syrian response to the weapons agreement followed earlier comments from a high-ranking Syrian official, Ali Haidar, who described the plan as “victory” for President Bashar Assad’s government.

“On the one hand, they will help Syrians get out of the crisis, and on the other hand, they averted a war against Syria by removing the pretext for those who wanted to unleash one,” Ali Haidar Minister of State for National Reconciliation told Russian news agency Ria Novosti.

US rushed to send its warships toward Syria and announced it was going to attack some Syrian army bases, to change the balance in the war which would have been in favor of anti-Syria militants.

A new study showed that almost half of the militants fighting against the Syrian government are hardline extremists with links to Al-Qaeda, split into around 1,000 fragmented cells.