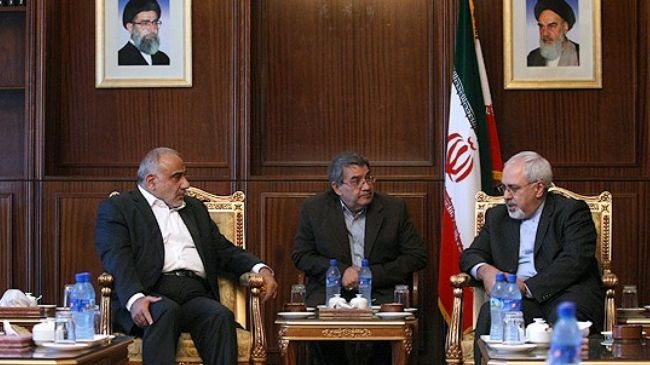 Iran Foreign Minister Mohammad Javad Zarif says the Islamic Republic’s nuclear issue can be solved if the other side shows “diligence and wisdom.”

“Iranians showed in the recent [presidential] election [in June] how much they believe in their might and strength and [how] they will not give up their rights,” Zarif said on Monday.

He made the remarks in a meeting with former Iraqi vice president and a member of the Islamic Supreme Council of Iraq (ISCI) Adel Abdul-Mahdi, who is currently in Iran.

“Nuclear know-how and technology have become indigenous in Iran and while we place emphasis on our legal right, we are ready to negotiate to resolve this [nuclear] issue,” Zarif stated.

Tehran strongly rejects the claim against its nuclear energy program, maintaining that as a committed signatory to the Non-Proliferation Treaty and a member of the International Atomic Energy Agency, it has the right to use nuclear technology for peaceful purposes.

Zarif further pointed to the situation in the Middle East, particularly in Syria and said terrorism in the region has foreign roots.

He added that foreign powers seek to establish their desired balance in the region and noted that supporters of extremism and Takfiri groups failed to reach their goals in the region after the war on Syria was stopped.

Damascus has vehemently denied the accusations, saying the attack was carried out by the militants themselves as a false-flag operation to provoke foreign military intervention.

On September 10, Syrian Foreign Minister Walid al-Muallem said Damascus is ready to implement a Russian proposal to place its chemical weapons arsenal under international control, a move that has frustrated US efforts to launch a military offensive against Damascus.

Abdul-Mahdi, for his part, said foreign powers have been constantly trying to change the balance in the region and in the world, particularly after the victory of the Islamic Revolution in Iran in 1979.

He added that Iran has turned into a strong regional and international country.